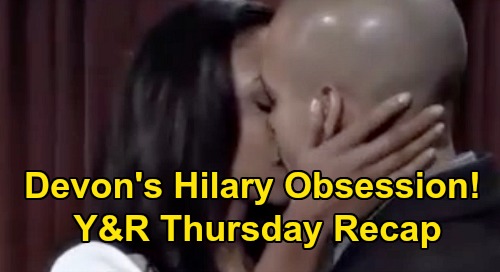 The Young and the Restless spoilers recap for Thursday, September 24, tease that Nick Newman (Joshua Morrow) and Phyllis Summers (Michelle Stafford) will confer at the Grand Phoenix while Summer Newman (Hunter King) steps aside for a moment.

Nick will want Phyllis to help him talk Summer out of her engagement to Kyle Abbott (Michael Mealor), but Phyllis will say that she wants Nick to be the amazing, sensitive man that he is.

Summer will return and Nick will start talking about how he is afraid that Summer has a romanticized version of reality that she’s talked herself into, and he will point out that Kyle isn’t even divorced yet.

Summer will insist that it’s a piece of paper that doesn’t mean anything. Both Summer and Nick will expect Phyllis to be on their side, but Phyllis will take a different approach.

Phyllis will point out that Summer is impulsive, and that she needs to stop thinking that her parents aren’t going to worry about her. Phyllis will chide Summer for keeping the engagement a secret from them, then she’ll turn to Nick and point out that he was younger than Kyle when he married Sharon Newman (Sharon Case). Phyllis will think that they should celebrate the joy and love that they all have.

Summer will give it a shot, and she’ll tell Nick that he’s her hero and that she’s proud to be his daughter. Nick will say that he’s crazy about Summer, but then he’ll slip and say that he can’t pretend to be ok with the engagement. Summer will get upset and leave, and Phyllis will look exasperated with Nick.

Elena will urge Devon to let her in so she can be there for him, and Devon will explain about what he and Amanda talked about. Devon will reference the fact that he’s moved on and is happy with Elena, but Elena will still seem upset.

At the New Hope Clinic, Nate Hastings (Sean Dominic) and Amanda will talk about Hilary Hamilton (Mishael Morgan), as well as about Nate’s fiancé whom he lost.

Nate will bring up Elena and her feelings, and Amanda will note that Nate is protective of Elena. After a nice talk, Amanda will take off, saying that she enjoyed getting to know Nate better.

Later, Elena will arrive for work, and she’ll be snippy with Nate about encouraging Amanda to go quiz Devon about Hilary. Elena will be irritated that Nate wants to help her after setting this whole thing in motion.

Later, Elena will apologize to Nate for taking things out on him, and she’ll say that she’ll be ok, and that she and Devon will be ok.

Back at Devon’s penthouse, Devon will reminisce about Hilary, remembering the various stages of their relationship, from their first interest in each other to the time when she told him that she was pregnant with their child to the time when they married on Hilary’s deathbed.

While this is going on, Amanda will be at Crimson Lights watching Hilary on old recordings of GC Buzz.

At Adam Newman’s (Mark Grossman) penthouse, Billy Abbott (Jason Thompson) will show up to talk to Adam about Alyssa Montalvo (Maria DiDomenico), who appears to be missing. Adam will let Billy know that he knows about Billy’s meetings with Alyssa about Vegas.

Billy will basically accuse Adam of getting rid of Alyssa, but Adam will remain defiant and tell Billy to prove it.

Things will turn contentious, and Billy will tell Adam that he knows about what happened in Kansas all those years ago. The men will be escalating to shouting when Chelsea Lawson (Melissa Claire Egan) comes in and makes them stop.

Adam will take a call upstairs, and Billy and Chelsea will get into it, with Billy telling Chelsea that Adam is going to destroy her life.

After Billy leaves, Adam will return to the room, and Chelsea will insist on knowing what Adam “handled” and if he made Alyssa disappear. Adam will say that he couldn’t let Billy and Alyssa get close to the story. “What did you do?” Chelsea will ask.

Back at the Grand Phoenix, Billy will stop in for a drink, and he’ll suddenly get a call from Alyssa. Viewers won’t hear Alyssa’s side of the conversation, but from Billy’s words it will appear that Alyssa has crucial information to send to Billy about the story on Adam.

Billy will tell Alyssa to send the information to him now, and Billy will belt down a drink, saying to himself that Adam’s day of reckoning is coming and that it is long overdue.

It sounds like a lot of Y&R drama is heating up for Thursday’s episode, so stay tuned! Here at CDL, we’re your go-to source for all the latest Young and the Restless spoilers, updates, and news. We’ve got you covered!