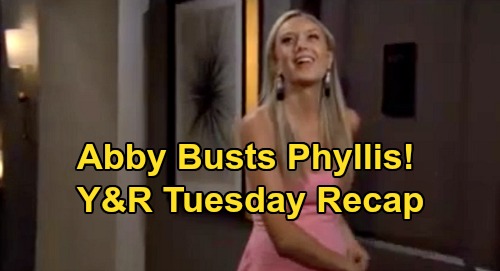 The Young and the Restless spoilers recap for Tuesday, August 25, tease that Nick Newman (Joshua Morrow) will show up at the New Hope Clinic to see Elena Dawson (Brytni Sarpy) and offer her a personal nudge to respond to an email she’d be getting shortly. Nick will vanish, and Elena will get the email, read it, and say, “Hell, yes.”

Abby will run off, and Nick will emerge, telling Nikki that she should answer the email she’ll be getting soon. Just then, Nikki will get the email and grimace when she sees that it is Grand Phoenix related, which means that Phyllis Summers (Michelle Stafford) will be involved.

Nick will urge Nikki to come see what the “perfect escape” is all about, and he’ll tell Nikki to get Abby to come, too. Nick will leave, and Abby will return saying that she just got a weird email. Nikki will admit that she’s considering going.

At Chancellor Communications, Lily Winters (Christel Khalil) and Traci Abbott (Beth Maitland) will be in talks about Traci coming to head up Chancellor’s online fiction division when Nick ambles in. He’ll tell them about the email they’ll soon be getting, and that it’s all about a night of fantasy and indulgence. Traci and Lily will be intrigued.

At the Grand Phoenix, Phyllis will hear from Nick that his mission is accomplished. Summer Newman (Hunter King) will arrive, as will Nikki. Soon, Traci and Elena will show up, followed by Abby and Amanda Sinclair (Mishael Morgan).

Phyllis will welcome all the women to a night to remember at the Grand Phoenix, and she’ll explain that she’s got personal experience designed for each of them.

Everyone will disassemble, but Abby will remain in the lobby, with a riddle sent to her phone saying something to the effect of “Temptation is everywhere – the eyes see everything.”

Abby will balk, and Phyllis will tell her to just go to room 407 and go with it. Phyllis will walk off, and Abby will get on the phone with a hotel employee asking about the surveillance system, which she’ll find out is working correctly. Abby will ponder that.

In a suite, Lily and Traci will arrive to find high tea set up. Traci will be touched, and she’ll explain that she used to take Colleen Carlton (Tammin Sursock) for high tea in New York City. Lily and Tracy will have a nice talk about Colleen, sharing stories about her and reliving some truly good times.

Talk will turn to work, and Traci will hear about what it’s like for Lily to work with Billy Abbott (Jason Thompson). Finally, Traci will accept Lily’s offer to come work at Chancellor, and both women will be thrilled.

After some more talk about Colleen and past times, Traci and Lily will realize how important they are to each other, and they’ll have re-established an important bond.

In another suite, Amanda and Elena will return from having gotten pedicures, and they’ll enjoy each other’s company and getting to know each other.

Amanda and Elena will talk a little about how Amanda hasn’t had many girlfriends due to her relationship with Ripley Turner (Christian Keyes), but she’ll definitely establish a good friendship with Elena during their time together.

After massages, talk will turn to Amanda’s burgeoning relationship with Nate Hastings (Sean Dominic), and Amanda will thank Elena for helping Devon Hamilton (Bryton James) to deal with the fact that she looks like Hilary Hamilton (Mishael Morgan).

At the end of their conversation, Amanda and Elena will realize that they’ve become good friends, and they’ll be happy.

In another room, Nikki will enter to find a baby grand piano with gorgeous flowers and sheet music titled “Sonata For Nikki.” Nikki will sit down and play the beautiful sonata happily. Meanwhile, in her room, Summer will be playing her favorite video game wildly, with not a care in the world.

Meanwhile, Abby will still be in the lobby and on the phone with another member of the hotel’s security team. Abby will learn that Phyllis had new security cameras placed right outside room 407, and Abby will barge up to room 407 to find a room service cart with champagne in front of the door.

Abby will ask to have the security camera disabled, and she’ll assume that Phyllis wants to catch her getting drunk and record it.

Abby will take the champagne and go in her room, then she’ll search the room and find another security camera hiding behind some flowers. Abby will unplug the camera and throw it out of her room, musing that Phyllis is messing with the wrong woman.

Later, Abby will get a text from Phyllis saying, “Well played. Adventure is in your blood. I know you better than you think.”

As their evenings wind down, Phyllis will check on each room – Lily and Traci will be great, Summer will be thrilled with her evening, Elena and Amanda will say that the night was a success, and even Abby will indicate that she had fun.

Phyllis will check on Nikki last, who will be enchanted by the Sonata. “So, you in?” Phyllis will ask Nikki.

A short time later, Phyllis will be in the lobby with Summer, who will wonder what Phyllis’ next step is. “We wait,” Phyllis will say. Summer will remark that the whole Escape Club idea is brilliant, especially with the sliding scale pricing. “Let’s see if everyone else agrees with you,” Phyllis will say.

Over at Society, Lily and Traci will gush about their good evening. Lily will remark that she didn’t think that they’d have to pay Phyllis for the experience. Traci will admire Phyllis’ creativity.

Over at the bar, Amanda and Elena will talk about the idea of a women’s only club. Amanda will say that guys have their old cigar clubs, so why couldn’t they have this? Abby will walk up to the bar, and even she’ll admit that Phyllis has a great idea.

Back at the Grand Phoenix, Summer and Phyllis will continue talking. Phyllis will think that perhaps she should do another Escape Club night and invite Sharon Newman (Sharon Case) and Victoria Newman (Amelia Heinle). “A club needs members,” Phyllis will say.

Phyllis will be anxious about whether the other ladies will be “in” for the idea, and Summer will urge her mom to relax. Soon, Phyllis’ phone will start to ding, and she’ll hear from everyone who attended that they’re all “in.” “It’s a success,” Phyllis will gush. “Welcome to Escape Club.”

Tuesday’s episode of Y&R is not to be missed, so stay tuned to the CBS soap! We’ll keep you current with all the latest Young and the Restless spoilers, updates, and news, so stick with CDL. We’ve got you covered!