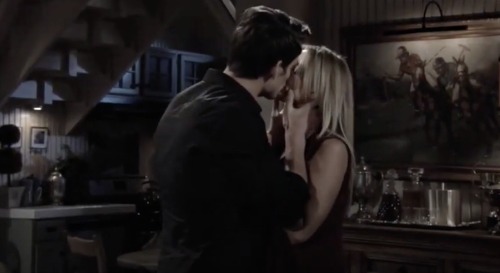 Rey is very leery of Sharon’s willingness to serve as Adam’s therapist. Chelsea Lawson (Melissa Claire Egan) was deeply concerned about what this connection could lead to as well, but she’s come to believe that Adam can be helped. Sharon’s admission helped to sway Chelsea’s opinion.

Sharon and Adam are commiserating through the crisis each is currently facing. Sharon’s cancer diagnosis is the greater danger because she hasn’t beaten this life-threatening disease yet. Adam’s seeming memory gap issue impacts his psyche, which has brought a new set of challenges for a character that’s long been embattled.

Adam wants to determine what he did in Kansas when he was eleven years old, which, in all likelihood, won’t create legal consequences and could help him to resolve family differences.

Rey hasn’t injected drama into his relationship with Sharon, as Adam, Nick Newman (Joshua Morrow) and others did during their pairings with her. Instead, Rey initially needed to deal with the end of his marriage to Mia Rosales (Noemi Gonzalez) and then had to overcome uncertainty regarding Sharon’s ability to fully commit to him.

Sharon sees Shey as a comfortable relationship, with Rey offering stability. He provides a different take than past men she’s loved. Vilasuso’s character is literally law and order, whereas Adam has regularly skirted the law and morality.

Young And The Restless Spoilers – Shadam Returns Through The Back Door?

The fans see what Rey does and Chelsea likely will again. Shadam could revive as a result of the therapy sessions.

Neither Sharon nor Adam entered this working relationship intending to turn it personal. But the intensity of the feelings and memories Sharon is bound to help Adam discover will create a response from this specific therapist that a neutral party simply would not have.

Y&R hasn’t paired Sharon and Adam since early in the last decade. But the Grossman recast, which reverse SORAS’d (soap opera rapid aging syndrome) Adam, creates a fresh dynamic that can be explored and now, seems likely to be.