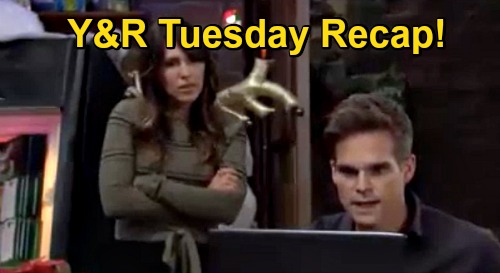 The Young and the Restless spoilers recap for Tuesday, December 22, tease that Nate Hastings (Sean Dominic) and Elena Dawson (Brytni Sarpy) will be at Crimson Lights when Devon Hamilton (Bryton James) walks in and things will feel tense.

Devon will ask about Nate’s hand, and Elena will get upset and walk off. Devon will walk off as well, and when Elena returns to the table she’ll gaze at Devon from across the room and fantasize about spending the holidays with him.

Nate will break into Elena’s fantasy by saying that Devon will be ok. Elena will note that Devon is covering up his pain, and Nate will say that it’s time they all move on with their lives.

Devon will gaze at Elena from across the room, and he’ll remember Elena telling him that she loves him for the first time, but then his memories will turn to when he found out that Elena slept with Nate.

Later, Nate will suggest that he and Elena get out of town for a few days, but Elena will think that it’s a bit soon for that, and she just won’t be ready. Nevertheless, Elena will agree to think about it, and Nate will say that he’ll wait to hear from her.

Over at Chancellor Communications, Lily Winters (Christel Khalil) will tell Billy Abbott (Jason Thompson) that they can’t go to New Orleans and risk him potentially not being home to be with his kids on Christmas.

Billy will agree, then he’ll get an idea and rush out, telling Lily to keep her schedule for the evening open.

At the Chancellor mansion, Chance Chancellor (Donny Boaz) will unwrap a fertility idol, which will be a gag gift from one of his friends. Abby Newman-Abbott-Chancellor (Melissa Ordway) will disappointingly say that they may need it, and that she’s not pregnant.

Chance will remain optimistic. Billy will call Abby, saying that he wants to rent out Society for dinner with Lily. Abby will tell him to run the idea past Lola Rosales (Sasha Calle).

Soon, Kevin Fisher (Greg Rikaart) and Chloe Mitchell (Elizabeth Hendrickson) will drop by the mansion to pick up a few things, and Abby will leave upset after Kevin and Chloe talk about their kids for a bit.

Chance will go after Abby, and Chloe and Kevin will find the flash drive in the box on the sofa table, wondering what it is and who it belongs to.

At Society, Billy will talk with Lola about his big surprise for Lily, and Lola will be on board. Billy will call Lily and tell her to meet him at Society shortly, then he’ll get busy sprucing up the restaurant for Lily.

Abby and Chance will arrive and talk with Billy about how glad they are that he was cleared in the shooting. Chance will like Billy’s idea for Lily, and he’ll decide to do something special for Abby later.

At the Grand Phoenix, Lily will bump into Amanda Sinclair (Mishael Morgan), whom she’ll ask for help in choosing a dress for her evening with Billy. Amanda and Lily will head to Lily’s suite, where Lily will model several outfits, finally choosing the right one.

As Amanda’s leaving, she’ll get a call from her private investigator with news. “That can’t be,” Amanda will tell the PI.

Back at Society, Lily will arrive to find Billy behind the bar mixing drinks. Lily and Billy will be happy and flirty with each other, and they’ll have a toast to Billy’s freedom.

Dinner will be a rousing success, and Billy will ask Lily to dance afterwards. Lola will emerge, asking how dinner was, and Lily and Billy will gush about how wonderful everything was.

Back at the Chancellor mansion, Chance will return, and Kevin will learn that the flash drive doesn’t belong to him.

Chance will offer to see if the drive belongs to Jill Abbott (Jess Walton), but just then Chloe will burst in, saying that the flash drive belongs to Esther Valentine (Kate Linder), which will be a lie, but it will allow Chloe and Kevin to hold onto the drive.

Later, Abby will return to the mansion to find Chance there with a tropical setup, including fake palm trees. Chance will say that he wants to show Abby that their tropical honeymoon will last the rest of their lives.

In addition, Chance will give Abby an early Christmas present for next year – a baby’s first ornament that they can hang on the tree in 2021.

Kevin will hack into the files on the drive, and he’ll say it has something to do with Newman Enterprises.

Chloe will see a $2 million figure, and Kevin will say that someone in the Los Angeles office of Newman Enterprises has been siphoning funds and sending cash through a third party to an offshore account.

Kevin and Chloe will wonder how Gloria got that information and what she’s going to do with it.

Finally, at Devon’s penthouse, Amanda will arrive and promptly tell Devon that she’s got big news. Amanda will say that her private investigator things that he found her birth mother.

Tuesday’s episode is going to be great, so stick with the CBS soap! We’ve got you covered with all the latest soap news and spoilers, so stick with CDL. We’re your go-to source for the Young and the Restless updates and information.