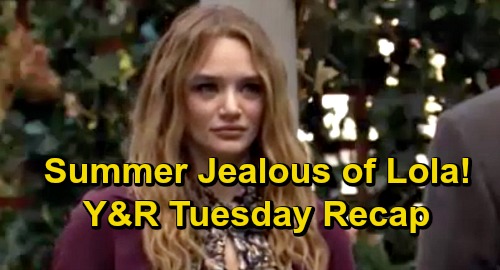 The Young and the Restless spoilers recap for Tuesday, September 29, tease that Phyllis Summers (Michelle Stafford) will spot Billy Abbott (Jason Thompson) at Crimson Lights, and their usual verbal sparring will ensue.

Nick will sort of shrug it off, and he’ll half-heartedly offer to help. Nikki will quickly get the idea that Nick doesn’t care what happens to the family, and Nikki will leave upset.

At the Newman Ranch, Victor will summon Victoria for a conversation. Victor will say that he’s having Alyssa Montalvo (Maria DiDomenico) followed, and that he knows that she’s working with Billy. Victoria will play dumb, but she’ll clearly be worried.

Victor will ask Victoria to spy on Billy and find out what he’s planning. Victoria will promise to step up if she learns that anything damaging to the children is coming, and she’ll hastily leave.

Later, Nick will arrive to see Victor, and Victor will tell Nick that the family situation is dire right now, and that something big is coming that could affect the family and Newman Enterprises. Nick will balk a little, but eventually he’ll agree to help Victor. “Family first,” Nick will say.

Soon, Nikki will arrive to talk with Victor, and Victor will relay his conversations with Victoria and Nick. Nikki will think that Victoria knows more than she was saying about what Billy has planned, and she’ll tell Victor about overhearing Victoria’s phone call with Billy a few days ago.

Victor will question whether Victoria was being dishonest with him earlier.

At the Grand Phoenix, Phyllis and Nick will meet up in Phyllis’ suite. Nick will be on edge, and he’ll mention that something’s going on with Adam. Phyllis will recount how she ran into Billy earlier and that he hinted that Chancellor Communications was going to publish something explosive about Adam.

Phyllis won’t want Nick to get sucked into this, and she’ll try to convince Nick that he should just let the cards fall where they may.

Back at Crimson Lights, Victoria will find Billy, and she’ll fill him in on everything that Victor knows. “He thinks you need to be stopped, and he’s trying to figure out if I’m involved,” Victoria will say.

Billy will say that it’s too late for Victor to stop the story. Victoria will ask Billy how bad this will blow back on her family and Victor. “I thought you didn’t care,” Billy will say.

At Jabot, Summer Newman (Hunter King) will notice Kyle Abbott (Michael Mealor) looking melancholy, and it will turn out that Kyle and Lola Rosales’ (Sasha Calle) divorce is final.

Kyle will be preoccupied with how Lola is likely reacting, but Summer will be ready to pop the champagne and celebrate. Kyle and Summer will make a plan to meet later, after Kyle runs an errand.

At Society, Theo Vanderway (Tyler Johnson) will notice that Lola seems upset, and Lola will give Theo a chilly response, then she’ll spill that her divorce from Kyle is final.

Later, Kyle will show up and head into the kitchen to see Lola as Theo watches from afar. In the kitchen, Kyle will wonder if Lola is ok, and Lola will appreciate it, but she’ll have kitchen prep to do.

While all that is going on, Summer will come into Society and talk briefly to Theo, who will be all too happy to point her in the direction of the kitchen. Summer will see Lola and Kyle talking in the kitchen, then she’ll come back out to the dining room and blast Theo, clearly taking her frustrations out on him.

Theo will head into the kitchen to see if Lola’s ok, and it won’t be long before Theo is telling Lola that she can probably still have Kyle if she wants, and that she shouldn’t let this opportunity go by. “We both know you still want Kyle,” Theo will say. Lola will become irate and throw Theo out of the kitchen.

Back in Chancellor Park, Kyle will meet Summer, who will be mad about him running to Lola. Kyle will explain that he just went to see if Lola was ok, and Summer will get it, but she’ll say that it still hurt because Kyle didn’t tell her where he was going.

Summer will admit to being scared for their relationship, and Kyle will assure her that they’re endgame.

Tuesday’s episode of Y&R sounds terrific, so stay tuned! We’ll give you updates as Y&R news comes in. Stick with the CBS soap and don’t forget to check CDL frequently for the latest Young and the Restless spoilers, updates, and news. We’ve got you covered!