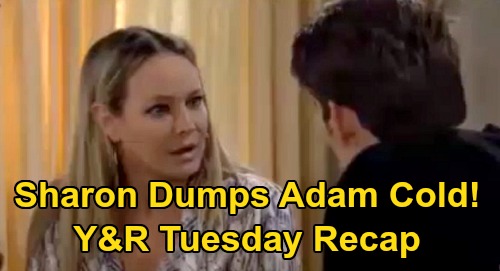 The Young and the Restless spoilers recap for Tuesday, September 8, tease that Sharon Newman (Sharon Case) will talk with Rey Rosales (Jordi Vilasuso) at her place. Rey will be disheartened to hear that Sharon wants to go to the doctor and get the news about her pathology reports by herself.

Rey will ultimately relent, but he’ll think it’s a mistake for Sharon to go by herself.

Meanwhile, at Society, Theo Vanderway (Tyler Johnson) will arrive to talk with Lola Rosales (Sasha Calle) about their argument earlier. Lola will brush Theo off and make him wait for her, and then she’ll continually shrug him off.

Eventually, Theo will force a conversation, and Lola will let Theo have it for blowing her off earlier when he was meeting with Billy Abbott (Jason Thompson) at Chancellor Communications. Lola will gripe at Theo and ultimately tell him to leave.

Rey will walk in and witness Lola and Theo’s interaction, and he’ll approach Lola afterwards and ask if everything’s ok. Rey and Lola will talk, and Rey will share how Sharon didn’t want him to go to the doctor with her.

Lola will wonder if Rey’s prepared for the news, and Rey will say no, but that they’ll get through whatever it is.

Back at Sharon’s place, Sharon will arrive home with her test results in hand. Rey won’t be there, and Sharon will open the results and glance at them, and clearly it will be bad news.

At the motel, Adam Newman (Mark Grossman) will get a visit from Chance Chancellor (Donny Boaz). Chance will tell Adam what’s been going on, and he’ll say that Adam’s got serious problems, since Alyssa Montalvo (Maria DiDomenico) is gunning for him.

Adam won’t tell Chance why he ran off, despite Chance’s pleas. Soon, there will be a knock on the door, and it will be Sharon. Chance will immediately think that Adam and Sharon are having an affair, and he’ll take off, upset.

Sharon and Adam will then argue about whether Chance is going to tell anyone that he saw them together. Sharon will be worried about people thinking they’re having an affair, but Adam will be pretty sure that Chance won’t say anything to anyone.

After a considerable amount of arguing about that, Sharon will lash out at Adam, basically tell him that he’s convinced himself that he’s a monster based on something that happened years ago, and that other people have bigger problems.

Despite Adam begging Sharon not to abandon him, Sharon will tell Adam that this arrangement is never going to work, and that he needs more than she can offer him.

Sharon will wish Adam good luck, but she’ll say that she’s out, and she’ll take off. Afterwards, Adam will sit by himself on the floor and wonder what’s next.

After a while, Mariah will go to make some tea, and Rey will spot the envelope from the doctor’s office on the table. Rey will read what’s in the envelope, and his face will fall.

Rey will tactfully get rid of Mariah, and later Sharon will arrive. Sharon will say that she came home after she saw the doctor, but Rey wasn’t there. Rey will apologize, and he’ll say that he knows, and that he saw the results. Sharon will break down sobbing, collapsing to the floor.

At Crimson Lights, Elena Dawson (Brytni Sarpy) and Nate Hastings (Sean Dominic) will talk. Elena will think that Nate pushed Amanda Sinclair (Mishael Morgan) into wanting the DNA test results, but Nate will explain that it wasn’t like that.

Soon, Devon Hamilton (Bryton James) will arrive, saying that he took Elena’s advice and followed his heart – and that he decided to help with the DNA test.

Devon will hand over a box containing Hilary Hamilton’s (Mishael Morgan) comb, barrettes, and hair ties to Nate. Devon will think that Hilary would have wanted to help Amanda, plus he’ll say the the identifies with Amanda’s desire to learn about her past.

Nate will leave with the box, and Devon and Elena will talk, with Devon thanking Elena for being so understanding about this.

Later, Elena and Nate will meet for a chat in Chancellor Park. Elena will be upset, and she’ll admit to Nate that she expected that Devon wouldn’t agree to help with the DNA test.

Elena will say that she doesn’t want Devon to do this, and Nate won’t understand Elena’s feelings. Then Elena will blurt out, “Do you really not see where this could lead?”

Nate will think that the idea of Devon and Amanda getting together is ridiculous, but Elena will say that Amanda looks just like Hilary, and that Devon and Amanda have already bonded over their common backgrounds.

Nate will think that Elena’s spinning out of control, and he’ll remind Elena that Devon is wholly committed to her. Elena will calm down a bit, but she’ll still maintain the DNA test results are going to change things.

Finally, at the Grand Phoenix, Theo will nurse a drink, still upset over his earlier interaction with Lola. Theo will send Lola a text saying that he doesn’t like how they left things, and that they should finish their talk. Lola will reply: “I’m tired. I’m going to crash now.” Theo will sigh.

Tuesday’s episode of the Young and the Restless sounds fantastic, so stay tuned to the CBS soap! We’ll keep you up to speed with the latest Y&R news, spoilers, and updates. Here at CDL, we’ve got you covered!