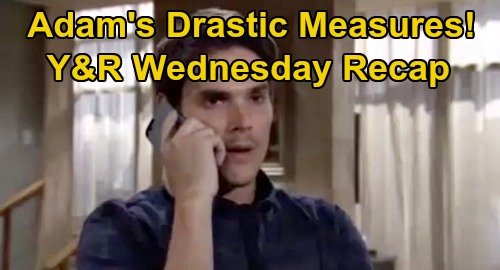 The Young and the Restless spoilers recap for Wednesday, September 23, tease that Chance Chancellor (Donny Boaz) will meet with Abby Newman (Melissa Ordway) at the Grand Phoenix. Chance will relay his last conversation with Adam Newman (Mark Grossman) to Abby and how Adam shrugged him off and said that the Vegas problem was “taken care of.” Chance will warn Abby that this whole situation could go down the drain and fast.

Meanwhile, Chelsea Lawson (Melissa Claire Egan) and Adam will be listening in to the goings-on over at Chancellor Communications. There, Victoria Newman (Amelia Heinle) will have just showed up and she’ll tell Billy Abbott (Jason Thompson) that she’s got a source for Alyssa Montalvo (Maria DiDomenico) who can confirm that Adam messed with Victor Newman’s (Eric Braeden) medications – the pharmacist who helped Adam double Victor’s dosage.

Adam will decide that he needs to act quickly, and he’ll tell Chelsea that he’ll handle it, but the less she knows, the better. Chelsea won’t like it, but she’ll trust Adam. Later, Adam will call someone and say that he needs to have something handled…now.

Back at Chancellor Communications, Billy will tell Victoria that the way Victor has treated his children is just wrong, and that maybe if Victoria had listened to him from the get-go, things would have been different between them.

Victoria will lash out, saying that Billy is the only reason things didn’t work out between them, and she’ll leave in a huff.

Victoria will reference the skeletons in Chance’s closet, and again he’ll try to brush it off, but Victoria will take aim Chance’s integrity and she’ll even insinuate that he could have conflicts of interest working as a cop.

Chance will ask if Victoria’s questioning his integrity, and Victoria will say that she won’t be the last, so he’d better get used to it. Victoria will walk off, leaving Chance upset.

Back at the Grand Phoenix, Billy will call Alyssa, letting her know that he’s coming up to her suite. When Billy knocks on Alyssa’s door, the door will be ajar, and Billy will walk in to find the suite empty and Alyssa nowhere to be found.

Next, over at the New Hope Clinic, Nate Hastings (Sean Dominic) will get the cold shoulder from Elena Dawson (Brytni Sarpy), and he’ll try to figure out why. Elena will then get a text from Devon Hamilton (Bryton James) saying that he’s with Amanda Sinclair (Mishael Morgan) right now.

Elena will fume as she learns that Nate helped Devon realize that he wanted to help Amanda learn more about Hilary Hamilton (Mishael Morgan).

Nate will offer to help keep her grounded and safe, but Elena will have to go, and Nate will be frustrated as she leaves.

After describing Hilary’s personality and what made her special, Devon and Amanda will watch a video of Hilary together, and Amanda will be amazed, saying that it is surreal to see Hilary in the flesh.

Devon will offer to let Amanda come back anytime she wants to talk about Hilary, and Amanda will say that she’ll take full advantage of his generosity. Later, after Amanda’s gone, Elena will return home to find Devon waiting for her with a fancy dinner setup.

Devon will tell Elena about how his talk with Amanda went, but mostly he’ll want to pamper Elena for the evening. Elena will be touched, but she’ll still seem on edge about the whole Amanda situation.

Finally, Amanda will go to the New Hope Clinic to see Nate, and she’ll gush about her visit with Devon. Amanda will say this whole thing is an unbelievable adventure, and soon Amanda will start crying.

Nate will think something’s wrong, but Amanda will be crying because she’s so happy to finally have people of her own. “This is a beautiful beginning,” Amanda will say.

It sounds like a lot of Y&R drama is heating up for Wednesday’s episode, so stay tuned! We’ll give you updates as Y&R news comes in. You can count on CDL to give you the latest Young and the Restless spoilers, updates, and news. We’ve got you covered!