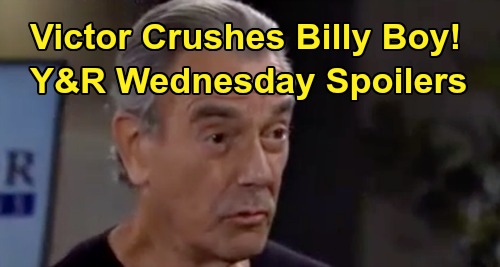 The Young and the Restless spoilers recap for Wednesday, September 30, tease that Jack Abbott (Peter Bergman) will meet with Traci Abbott (Beth Maitland), who will be back from a trip. Traci will say that she found out about Dina Mergeron’s (Marla Adams) mysterious emerald necklace.

Traci will explain that the necklace belonged to a princess but that it was stolen and went missing for centuries.

Then, the necklace was sold on the black market during World War II, when it was purchased by a GI for his girlfriend. Jack will guess that Dina might have been that girlfriend, but Traci will say that’s not the case.

Together, Jack and Traci will speculate that John Abbott (Jerry Douglas) could have given the necklace – which is called the “teardrop of love” – to Dina. Jack will want to learn more about this necklace.

Meanwhile, Chelsea Lawson (Melissa Claire Egan) and Adam Newman (Mark Grossman) will be at their penthouse listening to the goings-on at Chancellor Communications via the listening device that Chelsea planted there.

They’ll hear Billy Abbott (Jason Thompson) get some sort of message on his phone, and as Lily Winters (Christel Khalil) walks into the office, Billy will say they have a jackpot.

Billy will then read the title of Alyssa Montalvo’s (Maria DiDomenico) article: “Adam Newman: The Making Of A Monster.” From their vantage point, Adam and Chelsea will look at each other, horrified. Billy will text Amanda Sinclair (Mishael Morgan), who will be at the Grand Phoenix, saying that the story is ready to go. Amanda will grimace.

Lily will tell Billy that they need to wait to vet the article. Billy will fire back that he’s already sent the article to Amanda, but Lily will think that Amanda won’t approve it because of the risk of a libel suit.

As Chelsea and Adam continue to listen, Billy will call Amanda and put her on speakerphone with himself and Lily. Billy will be upset that Amanda doesn’t agree that the story is solid, and Amanda will think that this is too personal for Billy.

Billy will say that Chancellor Communications’ goal is noble – to expose the truth. As Billy and Amanda are talking, Billy will bring up Hilary Hamilton (Mishael Morgan) and the fact that Amanda took a risk to get to the truth.

Lily will ask what Billy is talking about, and Amanda will be forced to reveal that Hilary was her twin sister. Lily will be clearly affected by this, but Amanda will steer the conversation back to business.

Amanda will say that she needs to spend more time with the article, and that she’ll circle back. At the penthouse, Chelsea will think that it’s good news that Lily and Amanda have reservations about the article. Adam will say that it’s time to bite the bullet and call in the cavalry, since even legal warnings might not be enough to stop Billy.

Nick will say that he’s not willing to help protect Adam from the things he’s done. Victor will get a call from Adam saying that Billy’s about ready to publish an explosive story. Victor will agree to try to stop Billy.

At Society, Chance Chancellor (Donny Boaz) will find Abby Newman (Melissa Ordway) at the bar. Chance will want to talk about the future, and he’ll worry that he scared her before with his talk about children.

Abby will then tell Chance about her miscarriage five years ago that almost broke her. This will be news to Chance, as is the fact that Abby was married to a military veteran like Chance. Abby will then cut the conversation short and say that she’s got to get back to work.

Back at Chancellor Communications, Billy will get a call from Chelsea, who will still be at her penthouse. Chelsea will want to talk about the article that Billy’s about to publish, and Billy will wonder how Chelsea knew about that.

As they continue to argue, Billy will search around the office looking for a listening device. Billy will find it, and he’ll promptly end the call with Chelsea. After she hangs up, Chelsea will discover that her bug is no longer working.

At the Grand Phoenix, Nick will arrive at Phyllis Summers’ (Michelle Stafford) room, and he’ll share that Victor thinks that Victoria and Billy are working together to take down Adam. Phyllis will be impressed with Victoria, and she’ll again urge Nick to stay out of it. Nick will ultimately agree, saying that all of this couldn’t happen to a nicer guy, meaning Adam.

Down in the lobby, Adam will arrive to see Chance. Adam will reveal that Alyssa is alive and well, and that the damning article about him might include a paragraph or two about Vegas.

Chance will say that according to his sources, Alyssa gathered enough information in order to make an educated guess about what happened in Vegas. Adam will say that if he had to do it over again, he wouldn’t change a thing, and Chance will nod.

Back at Chancellor Communications, Billy and Amanda will talk, and Billy will apologize for spilling her Hilary news with Lily. Billy will ask if Amanda’s ok, and she’ll open up about how empty she feels about the loss of her sister.

Amanda will say that she feels angry and cheated, and she’ll reveal that she found no record of Hilary’s birth in Evanston, Illinois, so she and Hilary were probably born outside of a hospital.

Back at Society, Mariah Copeland (Camryn Grimes) will offer to lend an ear to Abby, who will clearly be trying to avoid someone. Abby will open up about her previous conversation with Chance, and Mariah will suggest that Abby shouldn’t let her fears about kids hold her back. Chance will arrive, and he and Abby will talk privately.

Abby will say that she loves babies and the idea of having them with Chance, but that she has some fear and doubt. Abby will say that for now she can give Chance a “maybe someday.” Chance will beam, saying that’s more than enough because he’ll take every moment he can get with Abby.

Back at the penthouse, Adam will return home to Chelsea, and he’ll tell Chelsea that the story is probably coming out, so they should brace for the worst. Chelsea will say that whatever happens, they’ll be ok, although Adam will be worried about Connor Newman (Judah Mackey).

At Chancellor Communications, Victor will come ambling in to see Billy. “Billy Boy, you know why I’m here, right?” Victor will say. Billy will be flippant, and Victor will tell him that he will suffer if he publishes his smear job.

Victor will call Billy overconfident, saying that overconfidence and hubris are two of his major flaws. Billy will fire back that Victor did this to himself.

Victor will then say that one protects one’s children, unlike Billy who failed in that department. Billy will immediately order Victor out of the office after that remark. Victor will tell Billy that he’ll rue this day for the rest of his life. Billy will be really peeved, and he’ll take his phone and hit “send” on the article.

Back at the penthouse, both Chelsea’s and Adam’s phones will ding, and they’ll see the story. Lily will rush up to Billy over at Chancellor Communications and ask Billy what he just did.

A lot of hot drama is heating up for Wednesday’s episode, so stay tuned! We’ll be sure to give you updates as more Y&R news comes in. Don’t forget to check CDL frequently for the latest Young and the Restless spoilers, updates, and news. We’ve got you covered!