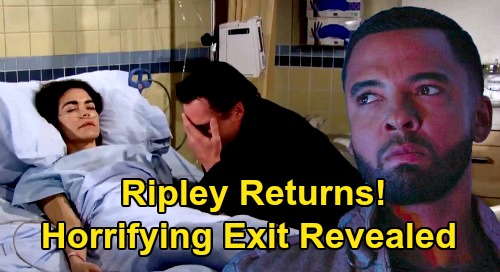 The Young and the Restless (Y&R) spoilers tease that Ripley Turner (Christian Keyes) is poised for a comeback. After all, Y&R can’t just let Ripley get away with stabbing Victoria Newman (Amelia Heinle)!

He mistook Victoria for Amanda Sinclair (Mishael Morgan), but it would’ve been just as horrifying if he’d attacked his intended victim. Ripley is a creepy attempted murderer and needs to pay.

Christian Keyes wasn’t mentioned, which proves Ripley’s not done yet. The Young and the Restless must have some form of justice in mind for Ripley. It’s possible Ripley will simply be apprehended, but why let him escape if that’s the case?

There has to be a bit more to it than that. If Ripley was just going to be captured and thrown behind bars, Y&R could’ve let Rey Rosales (Jordi Vilasuso), Paul Williams (Doug Davidson) or someone else on the scene stop him. Ripley could’ve been hauled down to the GCPD and that would’ve been that.

Instead, The Young and the Restless left the door open for another incident. Ripley has proven that he just can’t stay away from Amanda. He’s a stalker who refuses to leave her alone.

Ripley also failed to kill Amanda, so is that something he’ll try to rectify? Will Ripley find some way to corner Amanda and make another murder attempt?

That might pave the way for Billy Abbott (Jason Thompson) to be Amanda’s hero. He could stop Ripley – either by knocking him out or even using deadly force. Billy’s got a lot weighing on him at this point.

Billy feels terrible about Victoria’s crisis and is desperate to fix all this somehow. Billy can’t undo the past, but he could stop Ripley from striking again.

Dr. Clay (Sandra Thigpen) warned Billy that his dark side could still be triggered – and this is certainly the kind of thing that could do it! The Young and the Restless spoilers, updates and news say there’ll have to be some form of closure. One last showdown between Billy and Ripley might be a good way to go.

Whether Ripley is taken into custody after a battle or faces a grim fate instead, it sounds like some excitement is brewing. Don’t miss all our hot Young and the Restless spoilers, updates and news here at CDL.