The Young and the Restless Spoilers: Week of February 24-28 Preview – Billy Begs Victoria to Come Back – Coma Crisis Tragedy 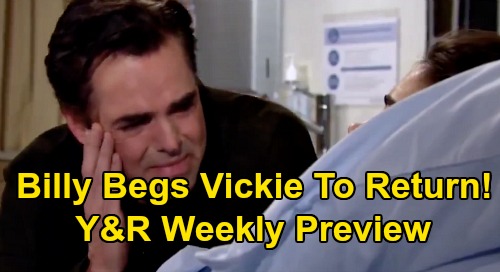 The Young and the Restless (Y&R) spoilers preview for the week of February 24-28 teases that Victoria Newman’s (Amelia Heinle) crisis will continue. A wonderful gala ended in tragedy when Ripley Turner (Christian Keyes) confused Victoria for Amanda Sinclair (Mishael Morgan) and plunged a knife. Now Victoria’s in a medically induced coma while her loved ones crumble over her brutal ordeal.

Nikki Newman (Melody Thomas Scott) will a weepy meltdown in the waiting room as she struggles. She’ll refuse to let anyone tell her that everything’s going to be all right. Nikki will feel like nothing about this is all right! Her daughter nearly died and won’t be getting any better according to Dr. Nate Hastings (Sean Dominic).

The Young and the Restless spoilers say Victor Newman (Eric Braeden) will do his best to be there for Nikki along with the rest of the family. They’ll all try to lean on one another during this difficult time. The Newmans will just need to have faith that Victoria is a fighter and will conquer this crisis like so many others that have come before it.

Of course, Victoria’s trauma will be the hardest on Billy Abbott (Jason Thompson). He’ll blame himself as he sits by Victoria’s bedside and speaks to his longtime love. They may not be together now, but Billy’s always going to care about Victoria. He’ll undoubtedly point out that Victoria has to come back, especially for her children’s sake.

Y&R’s weekly preview video shows Billy sobbing and covering his face with his hand. He’ll be broken up over everything Victoria’s been through. Billy will just want Victoria to remember that plenty of people need her, including him.

Thankfully, The Young and the Restless spoilers say Victoria will eventually start to stir. It looks like Billy’s sweet and supportive words will help. Victoria will wake up confused about what exactly went down, so she should get updates on all the Ripley chaos soon enough. She’ll also want news on her condition and what her recovery’s going to look like.

Y&R spoilers say Victoria’s got a long road ahead of her, but she’ll take the first steps in the week ahead. We’ll keep you posted on all the newest Young and the Restless spoilers, updates and news.