The Young and the Restless Spoilers: Sharon Fears Faith Shot Chance – Turns To Adam To Steer Police Away From Daughter? 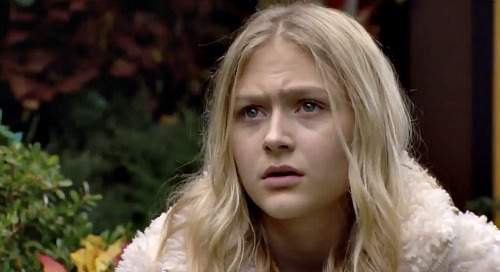 The Young and the Restless spoilers tease that Sharon Newman (Sharon Case) may soon take matters into her own hands in order to protect Faith Newman (Alyvia Alyn Lind). As Y&R viewers know, Sharon recently proclaimed that she was through with Adam Newman (Mark Grossman) and that she wasn’t going to try to “fix” or “save” him ever again.

Well, that might be the case, but we suspect that Sharon’s not beyond going to Adam for help if she’s backed into a corner. And that day could soon be coming where Faith is concerned.

Y&R viewers will remember that on the night that Chance Chancellor (Donny Boaz) was shot trying to protect Adam, Faith and her friend Jordan (Madison Thompson) were drinking in Jordan’s basement.

Faith happened to be very upset that evening about an earlier run-in with Adam, and she was out of touch for the whole evening from Sharon and Nick Newman (Joshua Morrow).

Sharon did receive what appeared to be a text from one of Jordan’s parents saying that the teens were in the basement watching a movie, but that could well have been faked by sneaky Jordan.

It looks like once Sharon learns about what Faith was really doing on the night of the shooting, she might really start to worry about whether her daughter could have been involved in Chance’s shooting. Sharon might fear that Faith was trying to shoot Adam, but that sheshot Chance instead.

Sharon surely won’t want to believe that Faith could have done something so awful, but the thought may well cross her mind, especially as she gets ongoing details about the investigation from Rey Rosales (Jordi Vilasuso).

Rey tends to share secret details with Sharon, and as Sharon learns more about what happened that night, she might start to suspect that Faith was involved.

Since there’s probably nothing that Sharon won’t do to protect Faith, she might want to steer the cops away from the possibility of looking in Faith and Jordan’s direction.

And that would probably take Sharon straight to Adam for help if she thinks that Faith really needs it. Might Sharon run to Adam to ask him for help in pointing the cops away from Faith and onto another suspect?

Adam might suggest that he can take care of the whole thing, even going so far as to manufacture evidence against someone else. Adam might actually enjoy the challenge, as he’d be able to possibly point the finger squarely at his nemesis, Billy Abbott (Jason Thompson).

Adam would get to help out Sharon and get back into her good graces, and he’d be able to stick it to Billy, which would be an added bonus.

We’ll see what happens here, but Sharon always seems to find a reason to go running back to Adam for something, and in this case, she’d need to do so quietly and outside of Rey’s awareness, which is a recipe for disaster.

Do you think Sharon will turn to Adam for help with Faith? Stay tuned to the CBS soap and don’t forget to check CDL often for the latest Young and the Restless spoilers, news, and updates.