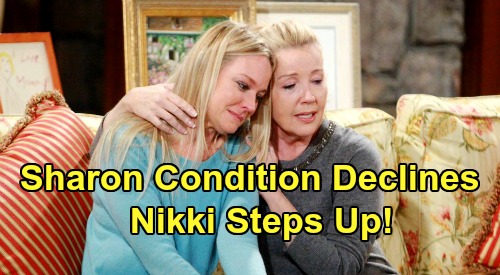 The Young and the Restless (Y&R) spoilers tease that Nikki Newman (Melody Thomas Scott) will make a shocking connection during the week of February 24-28. Does that mean with a person or could it refer to connecting the dots? It’s certainly possible it’ll be the latter since there’s indeed a shocking secret for Nikki to learn.

Y&R fans will recall that Sharon Newman (Sharon Case) wants to keep her breast cancer diagnosis under wraps for now. She’s grateful for “Team Sharon” and intends to lean on them, but she doesn’t want some giant pity party.

Sharon would rather have most of Genoa City just treat her normally. She’s not exactly thrilled that Phyllis Summers (Michelle Stafford) knows the truth, but Phyllis has been quite compassionate so far.

Of course, that doesn’t mean there won’t be more secret spillage. Phyllis probably wouldn’t divulge this news intentionally, but she could provide a clue or two by mistake.

Nick Newman (Joshua Morrow) or even Faith Newman (Alyvia Alyn Lind) could do the same. Nikki knows them both quite well, so it could become increasingly evident to her that something’s up. As more hints start dropping on The Young and the Restless, Nikki could easily start solving the puzzle.

It didn’t take Phyllis long to arrive at her own conclusion about Sharon facing a major medical crisis. Sharon herself accidentally confirmed that it was breast cancer – just assuming Phyllis had already found out exactly what it was.

Whether Nikki follows a similar path or not, she’ll eventually be brought in the loop somehow. From the sound of things, Nikki may bring herself in!

Perhaps part of this will involve Nikki’s concerns about all the Nick and Sharon bonding. She’s wary of Nick giving his heart to Sharon again, so she may confront him about their deepening friendship.

Between Nick’s reaction and any other clues along the way, Nikki’s bound to end up on the right track and get some cancer updates.

The Young and the Restless viewers have watched Nikki and Sharon battle it out over the years, but this certainly isn’t the time for more sparring. Once Nikki finds out what Sharon’s up against, she should have compassion just like Phyllis. Nikki will actually become a pretty important part of Y&R’s lengthy cancer story.

As Sharon’s condition declines and her world takes a dark turn, she’ll need all the support she can get – even Nikki’s. The Young and the Restless spoilers say some gripping material’s coming up. Be sure to visit CDL often for exciting updates and news.