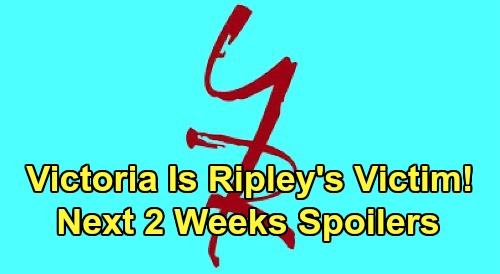 The Young and the Restless (Y&R) spoilers for the next two weeks tease that some shockers are on the way. During the week of February 17-21, Phyllis Summers (Michelle Stafford) will take great satisfaction in stirring the pot.

Chelsea will be in panic mode when she learns Adam killed a guy in Vegas and has taken steps to keep it quiet. She’ll be forced into selling her Grand Phoenix shares, which Abby Newman (Melissa Ordway) isn’t going to be happy about at the gala later.

After Chance Chancellor (Donny Boaz) confesses that Phyllis knows a secret he shares with Adam, Abby will put it all together. Once Abby’s in the loop on the shares situation, she’ll blast Phyllis and leave Nick Newman (Joshua Morrow) curious.

The Young and the Restless spoilers say Nick will corner Phyllis after Abby stomps off. He’ll assume Phyllis provoked whatever just went down, but Phyllis probably won’t spill very many details. She will, however, plant a big kiss on Nick before the party winds down.

Speaking of that party, this tribute to Newman Enterprises, Victor Newman and Eric Braeden is sure to be special. Y&R fans can expect lots of flashbacks and fun surprises, but it’ll end with a bombshell the Newmans never saw coming.

Some party crashers will show up, but things will only go downhill from there. The violent bloody aftermath should carry over into the week of February 24-28 according to the latest updates and news.

It won’t be long until Victoria Newman (Amelia Heinle) somehow becomes Ripley Turner’s (Christian Keyes) victim. Victoria will face severe injuries and will be rushed to the hospital, where her family will gather in the waiting area.

Paul Williams (Doug Davidson) will show up to take everyone’s statement, which will give Victor the opportunity to hold Billy Abbott (Jason Thompson) responsible along with Ripley.

As for Billy, he’ll watch over Victoria by her hospital bed. The Young and the Restless spoilers haven’t confirmed exactly what’ll land Victoria there, but Y&R buzz points to a stab wound.

Whatever the case, Victoria will be in bad shape and Billy will hate what she’s going through. There’ll undoubtedly be some heartfelt declarations from Billy in these quiet moments. Back with Victor, he’ll hand down a harsh ultimatum.

Billy will probably be the one facing it since Victor will hate him more than ever. Whether that involves staying away from Amanda Sinclair (Mishael Morgan) or something else, Victor may try to use Billy and Victoria’s kids as leverage. Victor could threaten to keep them away from Billy for good if he doesn’t cooperate.

Other Young and the Restless spoilers say Jack Abbott (Peter Bergman) will get in touch with Ashley Abbott (Eileen Davidson). They’ll still be reeling from all the gala drama, but it looks like they’ll have other matters to discuss – like Billy’s issues and perhaps some Jabot business, too.

Over with Abby, she’ll feel completely stymied. Abby may try everything she can think of to keep Phyllis from worming her way back into a bigger hotel stake, but her mission should fail.

Across town, Nikki Newman (Melody Thomas Scott) will make a startling connection of some sort. It sounds like she’ll see a link between something, so it’ll be interesting to see what this is all about.

Sharon Newman (Sharon Case) will continue to decline due to her chemo side effects, so that might be something Nikki figures out. There could be some other Newman puzzles to solve as well, so Nikki will be a busy woman. Don’t miss all our news and updates as these stories take some stunning turns!