The Young and the Restless Spoilers: Victoria Stabbed by Ripley’s Knife During Party Crasher Mayhem – Gruesome End to Newman Gala? 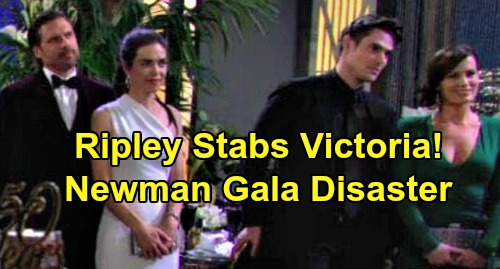 The Young and the Restless (Y&R) spoilers tease that Victor Newman’s (Eric Braeden) grand gala will lead to a tragic outcome. Y&R fans know Newman Enterprises is celebrating its 50th anniversary, which lines up with Braeden’s 40th anniversary on the CBS soap. The show’s basically combining all this into one exciting event to honor “The Moustache” and his portrayer.

There’ll be all the usual stuff you’d expect from an anniversary tribute – especially since this will stretch into three episodes. However, it’s what happens at the end of the gala that’ll really grab viewers’ attention. Victor’s shindig will take a startling turn when some party crashers show up and cause total mayhem – winding up with Victoria in the hospital for a long recovery.

Let’s consider the info we have so far and try to put these puzzle pieces together. We know that trouble’s headed Amanda Sinclair’s (Mishael Morgan way. Y&R spoilers, updates and news point to it along with Ripley Turner’s (Christian Keyes) ominous onscreen warning.

Ripley suggested that Amanda isn’t as strong as she thinks she is – and it sounds like he’ll try to prove it during the week of February 17-21.

Of course, Billy’s stuck to Amanda like glue these days, so you can bet he’ll want to protect her. If Billy once again stands up to Ripley, that should rile the menace up even more. However, it’s interesting that The Young and the Restless spoilers say there’ll be problematic party crashers – that’s plural.

Ripley’s going to be involved here, so he may realize Victoria’s at the event and seek her out. Since Ripley assumes Billy and Amanda are dating, that may be why he makes Victoria a target. One man’s ex for another man’s ex.

Ripley hasn’t been violent with Amanda in the past, but we’re dealing with a whole new ballgame. He’s not used to Amanda firing back OR the fact that she appears to have a new guy in her life. Whatever the case, Billy may follow Ripley and crash the party right along with him.

The Young and the Restless spoilers reveal that there’ll be a major confrontation, which Victoria will apparently get caught in somehow. A leaked Y&R video confirms that Victor will hold Billy every bit as responsible as Ripley when Paul Williams (Doug Davidson) investigates. We also know Victoria will be hospitalized following this incident.

How exactly will Victoria be injured? It’s not like Ripley could give Victoria a major beating in front of everyone at this party. It’ll have to be something quick and brutal. This hasn’t been confirmed, but The Young and the Restless insider buzz suggests that Victoria will get stabbed.

That makes sense considering Ripley could just plunge the knife and then boom. It’s done. There’d be no stopping him. The knife may not even be meant for Victoria if Ripley’s fighting with Billy and loses control.

Regardless, The Young and the Restless fans will be waiting to see these shocking scenes! You can stop back by for more updates and news as this storyline moves along.