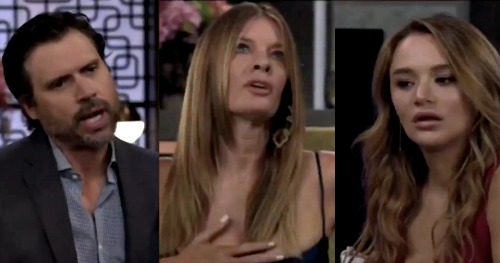 The Young and the Restless (Y&R) spoilers tease that Kyle Abbott (Michael Mealor) and Summer Newman (Hunter King) will have a big announcement to make. During the week of August 31-September 4, Summer and Kyle will summon Phyllis Summers (Michelle Stafford) and Nick Newman (Joshua Morrow) to The Grand Phoenix lobby. It’ll be time for the four of them to have a little meeting about something important.

“There’s something we want to tell you,” Kyle admits in a new Y&R preview video. That quickly sends Nick and Phyllis into panic mode – and why wouldn’t it? This is Genoa City! There’s always some bombshell just around the corner.

Summer and Kyle have certainly faced their fair share of them, so Nick and Phyllis will be left worrying another one’s arrived.

As a result, Phyllis and Nick’s minds will go to some worst-case scenarios. “Oh, you’re engaged,” Phyllis says while covering her face in frustration. “Are you pregnant?” Nick quickly adds. “Or both?!” Phyllis wonders.

Summer looks a bit taken aback by her parents’ mutual freak-out, but this is really to be expected since Nick and Phyllis are both somewhat wary of this reunion. Just because they’ve decided to accept “Skyle” and be supportive doesn’t mean they don’t still have concerns.

Of course, it’s possible Summer and Kyle will be engaged, pregnant or both by then. The Young and the Restless spoilers don’t confirm they aren’t!

Even so, there’s nothing to indicate that an engagement or baby’s on the horizon just yet – though this should give Summer and Kyle a sneak peek of what to expect when an announcement like that eventually comes.

Instead, this is obviously about Summer and Kyle’s decision to live together. There’s a chance Kyle and Summer could mess with Nick and Phyllis briefly. It might be amusing if Summer decided to roll with this and Kyle backed her up.

Kyle pulled a nice “gotcha” when he convinced Nick he was in an open relationship with Summer for a moment. Summer and Kyle could sell the idea that they’re engaged and expecting this time.

However, it’s doubtful that Kyle and Summer will torture “Phick” like that. They’ll probably be eager to clear this up before Phyllis and Nick go completely ballistic.

Once Nick and Phyllis realize Summer and Kyle simply intend to cohabitate, they should breathe a sigh of relief. Phyllis and Nick may also wonder why Kyle and Summer are making such a huge deal out of this.

Calling a meeting to announce this decision seems like overkill since Summer basically lives with Kyle already. They’re just making it official and want to get a real place together.

Nevertheless, Summer and Kyle probably just wanted to make sure there were no surprises along the way. Since Nick and Phyllis tend to overreact like they’re doing here, Kyle and Summer might figure it’s best to sit them down and explain.

This isn’t something Summer’s rushing into with Kyle. She’s put some real thought into it and is ready to take the next step.

As for the engagement and pregnancy possibilities, who knows? Maybe those announcements will be coming up at some point in the next year or so. If Kyle and Summer can make this last like they plan to, those are definitely additional steps they’ll take one day.