BY Heather Hughes on March 31, 2020 | Comments: one comment
Related : Soap Opera, Spoiler, Television, The Young and the Restless 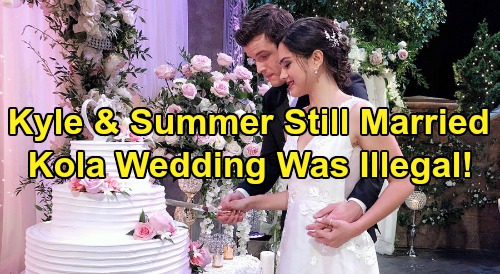 The Young and the Restless (Y&R) spoilers tease that a major twist may be brewing for Kyle Abbott (Michael Mealor) and his two brides. Y&R fans know Summer Newman (Hunter King) made a deal with Kyle last year, which involved marriage in exchange for donating part of her liver.

After Lola Rosales (Sasha Calle) received that life-saving donation, Kyle ultimately backed out and divorced Summer…or did he? Could Summer and Kyle still be married?! Something strange seems to be going on, so let’s look at the clues The Young and the Restless writers have offered.

For starters, we should go back to Kyle and Lola’s initial split. Lola was worried that they were never real, but Kyle assured her they were – they just weren’t forever. However, Lola may have had the right idea. Perhaps Kyle and Lola’s marriage indeed wasn’t real.

Next, we should consider how focused Summer is on doing things right this time. Summer wasn’t keen on celebrating what would’ve been her one-year anniversary to Kyle. She was all about looking to the future, not looking back. After all, that marriage was rather tainted since Kyle felt forced into it back then.

There’s also the matter of Summer’s “you’re still married” mantra. Summer’s been using that as an excuse for pumping the brakes with Kyle. When Kyle suggested getting a place together, Summer was quick to remind him of his marital status.

What if Summer’s right about Kyle still being married but wrong about who he’s married to? Was there a problem with “Skyle’s” divorce?

This is certainly the kind of thing that’d throw Summer for a loop. There’s been so much talk about not rushing this, but instantly being married again would rush their romance to the max! Summer could feel pretty in over her head and confused about what’s next.

It would be weird to divorce the man she’s crazy about, but Summer just isn’t prepared for this right now. It’d be incredibly complicated.

This is also something Theo Vanderway (Tyler Johnson) could use to his advantage. It’s clear that Theo would like to move his own romance with Lola along, so he might even arrange a bogus non-divorce for Summer and Kyle.

Theo’s definitely a troublemaker, so we wouldn’t put it past him. It’d be the perfect way to convince Lola to lean on Theo and take a huge leap forward.

Regardless, The Young and the Restless spoilers hint that Lola could face the ultimate blow. As other Y&R news emerges, we’ll pass along hot updates. Will Lola find out her fairytale wedding was never real? Could Kyle and Summer still be married – or at least seem that way due to Theo’s trickery? Stick with CDL for scorching Young and the Restless spoilers, updates and news.