The Young and the Restless Spoilers: Team Theo or Team Kyle – Lola Compares Present To Past, Makes Major Life Choice 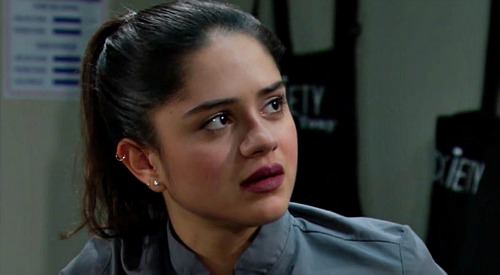 The Young and the Restless spoilers document that Lola Rosales (Sasha Calle) is unsettled. Since returning from Miami, Florida, she’s begun seriously adjusting to life post Kola. That hasn’t been easy.

At the same time as Lola has been adapting, she’s also entered the start of a relationship with Theo Vanderway (Tyler Johnson). He’s not like Kyle Abbott (Michael Mealor), to say the least.

Tola is a pairing of two people from similar economic backgrounds. That establishes a new course that Lola can take, if she wants to.

Young And The Restless Spoilers – Theo Vanderway All In

Theo has been into Lola for a long time. He likely didn’t find Lola to be attractive purely because she was with Kyle last year. But that did add an extra element to what eventually allowed Theo to fall in love with her.

Lola’s recent ask to him at the Grand Phoenix was revealing. He was nervous in her presence and she wanted to put him at ease.

While Lola has only been married once, which she described as her first serious relationship, Theo appears to have never been fully committed to any woman. That, along with his deepening feelings for Lola, caused him to be unsettled.

Young And The Restless Spoilers – Lola Rosales Tells Herself The Truth

Lola shows her authentic self to everyone nearly all the time. Theo is generally fronting a personality that’s not really him. So, does he have core beliefs, or are those yet to be fully developed?

Theo’s maturity level is, at times, similar to a high schooler. At other moments, like when he’s visiting his grandmother, Dina Mergeron (Marla Adams), Johnson’s character is fully down to earth.

The clear advantage of the Lola-Theo pairing is that each half doesn’t need to live up to the other’s perceived expectations. No old money attitudes exist. Just two outsiders in Genoa City, Wisconsin, who are trying to establish themselves.

Kyle buried his feelings for Summer Newman (Hunter King). That caused him to rebound into a relationship with Lola. While he cared for Calle’s character, he always loved Summer.

When that point in the plot is reached it will become possible for Lola to compare both guys, with resulting major life choices are made.