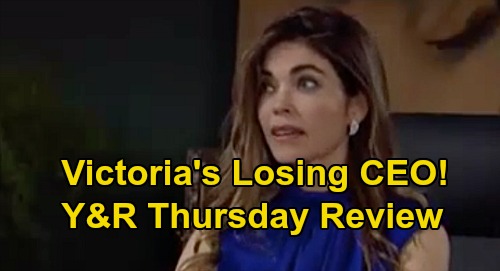 The Young and the Restless spoilers review for Thursday, April 2, tease that Sharon Newman (Sharon Case) will head to the hospital for her ultrasound, and afterwards she’ll wait nervously for the radiologist to come explain the results. Sharon’s head will spin as the radiologist’s voice fades into the background and she gets the news.

Sharon will then arrive at Crimson Lights in a daze, clearly upset by her results. Sharon will immediately notice some open sugar containers and she’ll take out her frustrations on the objects, smashing one of them to the floor. Rey will walk in just in time to see the scene, and he’ll realize that Sharon’s news must have been grim.

Back at home, Sharon will text Mariah Copeland (Camryn Grimes), then she’ll break down to Rey, saying that she feels so stupid for the scene at Crimson Lights. Rey will assure Sharon that no one is worried about that, and Sharon will wail that she thought the chemo was worth it because it was supposed to shrink the tumor, but that the tumor hadn’t shrunk as much as the doctors hoped.

Sharon will start to hyperventilate, saying that she has an appointment with her oncologist in a couple days to discuss “options,” and she’ll cry that there’s only one option. “I’m going to lose my breast, Rey,” Sharon will yell. Rey will tell Sharon to breathe, and that she doesn’t know yet how extensive the surgery will need to be.

Sharon will go on, saying that she doesn’t want Faith Newman (Alyvia Alyn Lind) to know about what happened at Crimson Lights. Rey will try to soothe Sharon, saying that she’s just had a shock, and that he’s there for her to lean on. Sharon will cry, “I don’t want this inside of me anymore. I want it gone!” Rey will hold Sharon as she cries.

Meanwhile, on the new episode of Y&R on Thursday, April 2, Victor Newman (Eric Braeden) will meet with Adam Newman (Mark Grossman) at Society. Adam will have a big speech for Victor, all about how deeds matter, not words, and how he’s got a new perspective now. Victor will sense that something must be coming, and he’ll ask Adam why his perspective has changed.

Adam will say that he’s happy now with Chelsea Lawson (Melissa Claire Egan) and Connor Newman (Judah Mackey). Adam will go onto say that he idolized Victor as a kid, and that he’s always wanted to win Victor’s approval.

Adam will muse that Victor has loved it that he could be ruthless, and he’ll go on about how Victor rejected him when he gave Nick Newman (Joshua Morrow) the Interim CEO spot.

Soon, Adam will whip out a manila envelope labeled “confidential.” Adam will tell his father to read what’s inside – it’s a story all about how AJ Montalvo didn’t die from a fall from a barn loft, and how Victor killed AJ, then paid off the coroner to rule the death accidental. Adam will say that he gets to decide whether that writeup sees the light of day.

Adam will then mock his father, asking him to say how proud he is now. Victor will smile and say that it’s an interesting writeup, but that it’s full of bull and that Adam has no proof. Adam will say that he does have proof – the evidence is locked away. Victor, looking partly proud and partly amused, will ask Adam what his terms are.

Next, at the Newman Ranch, Nikki Newman (Melody Thomas Scott) will talk with Victoria Newman (Amelia Heinle), who will be dressed and ready for work. Nikki will think that Victoria should still be taking it easy, but Victoria will be itching to get back to Newman Enterprises.

Victoria will explain that she had an epiphany about Billy Abbott (Jason Thompson) and that she bid him farewell which was liberating.

Nick will then brief Victoria on the latest business dealings, and Victoria will tell Nick that he can go ahead and leave for the day – she’s ready to take over. Once Nick goes, Victoria will straighten up the office, then look at Victor’s portrait and say, “Yep. I’m back.” Victoria will then get back to business.

Of course, now that Adam seems to have Victor in a bind, it looks like Victoria’s current reign at Newman Enterprises could be short-lived. Clearly, Adam wants the CEO spot and he doesn’t seem to care about the fact that Victoria is back and feeling good about her return.

For Adam, this is all about getting what he’s due. Will this cause Victoria to have a physical and/or emotional setback? Or will Victoria fight Adam with all she’s got?

Thursday’s episode of Y&R sounds terrific, so stick with the CBS soap! Remember that CDL is your place for the hottest Y&R news and spoilers. We’ll keep you updated on all the latest Young and the Restless news as it comes in.