The Young and the Restless Spoilers: Week of April 6 – Jack’s Emergency Meeting – Sharon Preps For Surgery – Adam Takes Over 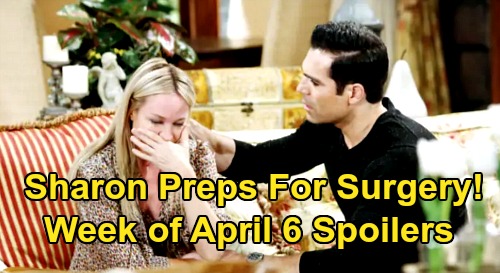 The Young and the Restless (Y&R) spoilers for the week of April 6-10 tease that some tricky situations are looming. First, Kyle Abbott (Michael Mealor) will object to Theo Vanderway’s (Tyler Johnson) move. Theo will take Lola Rosales (Sasha Calle) over to the Abbott mansion for a visit with Dina Mergeron (Marla Adams). Unfortunately, Kyle will view it as a blatant attempt to use their grandmother.

Kyle won’t think it’s right to manipulate Dina just so Theo can grow closer to Lola. Of course, Theo will undoubtedly argue that’s not what he’s doing. As their fight escalates, Kyle will contend that Theo doesn’t even know Dina. Theo will fire back that he belongs there every bit as much as Kyle does.

Suddenly, Dina will have an outburst on the sofa nearby. She’ll think Kyle and Theo are a young John Abbott and Stuart Brooks right as Jack Abbott (Peter Bergman) walks in. Jack will be furious with both Theo and Kyle, but he’ll mostly blame his son for their latest round of battle.

It won’t be long until Jack calls an emergency meeting to deal with this constant tension. One way or another, it has to stop. Kyle will worry about Jack’s big decision, but Summer Newman (Hunter King) will remain in Kyle’s corner. Summer will assure Kyle that he’ll get past this bump in the road with Jack.

Next, Nate Hastings (Sean Dominic) will be amazed when he picks up Amanda Sinclair (Mishael Morgan) for a hot date. Amanda will be looking good, but she won’t think Nate looks too shabby either! They’ll be one of the most gorgeous duos around town as they kick off a new romance.

Unfortunately, doubts will start creeping in for Phyllis Summers (Michelle Stafford). Phyllis is crazy about Nick Newman (Joshua Morrow), but can they really make it work this time? Phyllis will fear this reunion might be a mistake, so Nick may have to convince her it’s the right call.

Other Y&R spoilers say Sharon Newman (Sharon Case) will pass along some difficult news. Sharon will tell a crushed Mariah Copeland (Camryn Grimes) and Faith Newman (Alyvia Alyn Lind) that her chemo didn’t work. They’ll discuss Sharon’s upcoming surgery and their mutual fears, so at least everyone will be honest and communicating.

That trend will continue as Mariah fills in Tessa Porter (Cait Fairbanks). Shutting Tessa out caused big problems before, so Mariah will keep her promise and open up. It seems Tessa will rush home to be with Mariah as a result.

The tour was winding down anyway, so Tessa may insist Genoa City is where she needs to be. Y&R fans can expect Tessa to lift Mariah’s spirits in the week ahead.

Over with Adam Newman (Mark Grossman), he’ll want the whole Newman kingdom. Victoria Newman (Amelia Heinle) will explode over Adam taking the throne away from her, but Adam will insist it’s a sacrifice she’ll have to make – at least if she wants to protect their father.

After Adam updates Victoria, he’ll make it clear that he’s not backing down. Adam will indeed get the CEO seat back and will even replace Victor’s portrait with his own. The Young and the Restless spoilers say Adam will be feeling large and in charge, but that just means he’ll have a long way to fall!

As for Nick, he’ll be livid over Adam’s latest bombshell. Nikki Newman (Melody Thomas Scott) will try to restore some family peace, but it won’t be easy. Victoria will be on a mission for vengeance, but Victor may think they have to be strategic about it. Some tough choices will have to be made as this storyline moves forward.