The Young and the Restless Spoilers: Adam Steals Newman CEO Position – Takes Down Victor’s Portrait, Puts Up His Own

BY Heather Hughes on April 1, 2020 | Comments: one comment
Related : Soap Opera, Spoiler, Television, The Young and the Restless 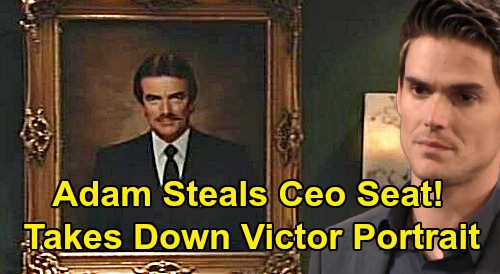 The Young and the Restless (Y&R) spoilers tease that another Newman family feud will erupt thanks to Adam Newman’s (Mark Grossman) plot for the CEO chair. Adam’s murder proof will convince Victor Newman (Eric Braeden) that he has to do what his son wants – at least for now. Victor’s true plan may be to lull Adam into a false sense of security or setting him up for an even bigger fall.

Then again, Victor may just need some time to strategize. Adam’s actually got what it takes to be a great CEO, so he may not cause a mess as Phyllis Summers (Michelle Stafford) once predicted. Phyllis convinced Nick Newman (Joshua Morrow) to take over in hopes of avoiding more pain for Victoria Newman (Amelia Heinle). Nick decided to step up and stop any of Adam’s potential damage.

Of course, now Adam’s set to do a different kind of damage. Adam’s going to tear his own family apart, so be prepared for some explosive scenes. Victoria decides she’s ready to make a Newman Enterprises comeback on April 2, but it’ll be short-lived. It won’t be long until Adam’s waltzing in with his slick suit on. Adam will be strutting around like he owns the place – and in a way, Adam will own Victor.

The Young and the Restless spoilers say Victor will give Victoria updates on the tricky situation, so she’ll fly into a rage. However, Adam will suggest his sis has nothing to worry about. As long as everybody plays by Adam’s rules, he’ll insist he can keep the story of AJ Montalvo’s murder quiet.

Of course, Victoria will also be furious over Adam stealing the CEO spot. She’ll wonder how Adam could be so cruel and calculating. After everything Victoria’s been through, Adam still wants to take this away from her?!

Victoria has her heart stomped on by Billy Abbott (Jason Thompson) and got stabbed in a case of mistaken identity. If anyone deserves a job she loves to wake up to in the morning, it’s Victoria. She’s worked hard to secure her place on the Newman throne, but this isn’t really about Victoria at all. It’s about Adam and his complex relationship with Victor.

Adam will have something to prove, so he’ll stand his ground and that means Victor will have to do the same with his daughter. Victoria won’t be reclaiming the CEO spot until Victor can get a grip on things. Y&R spoilers say Adam will believe he’s the true victor here. He’ll gleefully take Victor’s portrait and put up one of himself instead.