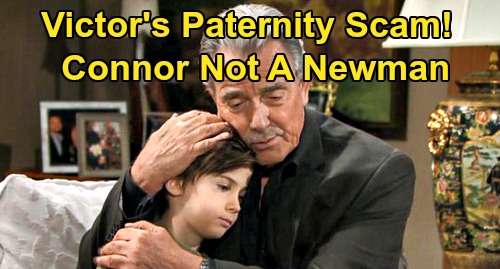 The Young and the Restless (Y&R) spoilers tease that Victor Newman’s (Eric Braeden) drastic plan could have some unanticipated consequences. Y&R viewers know Adam Newman (Mark Grossman) has been plotting against Victor. Adam wants to show Victor that he’s truly his father’s son – far more of a Newman than his not-nearly-as-ruthless siblings.

Although Adam’s plan will backfire, Victor’s retaliation scheme could easily do the same. Let’s consider how all this might play out. The Young and the Restless spoilers say Adam will present Victor with the evidence against him. Adam will show Victor the proof he gathered with Alyssa Montalvo’s (Maria DiDomenico) help, which will set up his blackmail bomb.

Victor will be forced to meet all Adam’s demands if he wants to keep his involvement in AJ Montalvo’s murder quiet. Of course, Victor won’t just sit back and let Adam win. The Young and the Restless spoilers say Victor will ultimately resort to desperate measures for his company’s sake as well as his family’s.

If you really pay attention to the dialogue, you’ll notice that Y&R’s playing up the father-son angle big time. Victor’s probably going to make Adam think he’s not a Newman, so there could be some serious ramifications.

Although Adam and Chelsea Lawson (Melissa Claire Egan) do their best to shield Connor Newman (Judah Mackey) from all the Newman drama, it doesn’t always work out.

We can’t forget how Victor faked his death, which led to duped Adam breaking the bogus news to poor Connor. Connor’s a smart kid, so he may figure out this phony Victor paternity scam or overhear and demand updates.

How’s Connor going to feel if he thinks Victor isn’t really his grandpa? This could cause a serious setback for Connor, who’s made great strides in his recovery since the hostage incident.

The last thing Connor needs is something else to put him in a dark place, but this just might do it. Connor’s identity is rooted in being a Newman just like Adam’s is – at least now that he’s in his dad’s life again.

If this is all Victor’s scam as expected, Chelsea and Adam are bound to be furious! It’s cruel to let Connor get caught in the war, but that could easily happen. Victor could hurt his grandson if he rigs it so Adam believes Victor isn’t his father.