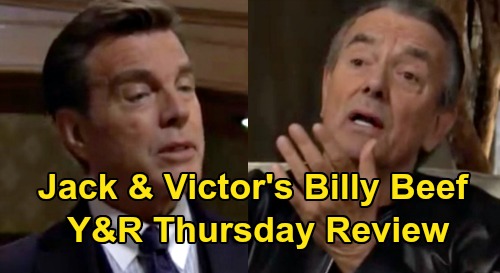 The Young and the Restless spoilers review for Thursday, February 13, tease that Jack Abbott (Peter Bergman) will arrive at Newman Enterprises to talk with Victoria Newman (Amelia Heinle) and offer her the Abbott family’s support. They’ll discuss their similar “radar” for Billy Abbott’s (Jason Thompson) troublesome behavior. Jack will think that Billy will soon realize that he’s made a colossal mistake, but Victoria will say that it won’t matter – she’s done.

Meanwhile, at the Grand Phoenix, Billy will try to persuade Amanda Sinclair (Mishael Morgan) to go for a ride in his new Italian race car. He’ll say that Victoria never approved of him getting a race car, and Amanda will note that she doesn’t really approve either. She’ll ultimately decline to go for a spin, saying she’s got other plans. Billy will race out the door, excited about his first ride.

Later, Amanda and Nate Hastings (Sean Dominic) will be talking at Crimson Lights about her recent ordeal with Ripley Turner (Christian Keyes) when Billy walks in. Amanda will ask how the car is doing, and he’ll relay that it’s in the shop now, and that he hit a piece of black ice and hit a tree…but that he doesn’t have a scratch on him.

While Billy’s getting coffee, Amanda will worry since Billy wouldn’t let the paramedics check him out at the scene. Nate will decide to give Billy the once-over, which he’ll do when Billy returns. Billy will seem fine, although Nate will note that his pulse is racing. Billy will be flippant about the accident and his health, and Nate will seriously say that thrill-seeking can be an addiction. Billy won’t be amused.

After Billy leaves, Amanda will be deep in thought, and she’ll tell Nate that Victoria previously accused her of enabling Billy’s thrill-seeking behavior. Nate will wonder if she feels that she did that, and she’ll say, “not on purpose.” She’ll wonder if Nate was serious about Billy being addicted to thrill-seeking, and Nate said it was a possibility or he wouldn’t have brought it up.

Billy will head back to the Grand Phoenix, where he’ll encounter Ashley Abbott (Eileen Davidson), who is back in town for the Newman Enterprises 50tn Anniversary Gala. They’ll be happy to see each other, although Billy will initially suspect that she’s going to lecture him. But she won’t have that in mind, and they’ll talk a bit about how Dina Mergeron (Marla Adams) blazed a trail for her, and how his role model was their dad.

Billy will relay that he no longer has the desire to follow in their dad’s footsteps, and Ashley will encourage him to go find his passion. She’ll express her sadness for Victoria and the kids, but she’ll say that he needs to live his truths.

Next, Jack will pay Victor Newman (Eric Braeden) a visit at the ranch, ostensibly to talk about Billy, but Victor will immediately announce that “Billy Boy will never change” and he’ll balk when Jack asks him not to lash out toward Billy around Victoria and the kids. Jack will note that he’s disappointed in Billy, too, but Victor will say that Jack will end up just making excuses for his useless brother.

Victor will bring up how Billy slept with Jack’s wife and embezzled funds from Jabot, and Jack will try to defend him, but Victor won’t stand for it. Jack will even try to point out that Victor forgave Adam Newman (Mark Grossman) for tampering with his meds, but Victor will set him straight about that, saying that it was Billy who caused Adam to think that Victor tried to kill him. Jack will be stunned by this.

Victor will go on to say that he forgave Billy for all of that, and then Billy goes and repays him by leaving Victoria and the kids. Jack will try to explain that Billy wasn’t consciously aware of his actions, but Victor will accuse Jack and the Abbott family of spoiling Billy, and he’ll yell that Jack needs to let Billy fall on his face and hit rock bottom so he can start to become a man.

It does seem like Billy is headed for rock bottom at the rate he’s going now. His reckless behavior could get himself or someone else seriously hurt, and according to Y&R spoilers, it looks like that could be happening very soon – at the Newman 50th Anniversary Gala. In fact, as CDL recently reported, it appears that Victoria might get seriously hurt as a result of Billy’s actions – something that’s sure to outrage Victor.

Meanwhile, on the new episode of Y&R on Thursday, February 13, Michael Baldwin (Christian LeBlanc), Lauren Baldwin (Tracey E. Bregman), Esther Valentine (Kate Linder), Chloe Mitchell (Elizabeth Hendrickson), and Kevin Fisher (Greg Rikaart) will congregate at Crimson Lights after Chloe’s ultrasound. They’ll share the ultrasound picture with the group, then announce that they are waiting until the birth to find out the baby’s gender.

But Michael will pick up on some facial expressions by Kevin, and he’ll quickly realize that Kevin knows the baby’s gender – turns out, he tracked down the ultrasound tech and found out the gender. After some razzing of Kevin, he’ll finally reveal that they’re having a little boy.

Later, Michael will privately take Kevin aside and say how happy he is for them, and Kevin will look a little weirded out. When Kevin and Chloe talk later, Kevin will admit that he’s a little scared that he won’t be a good father to a little boy, since he wasn’t raised by a good man, or to be a good man. Chloe will say that he’s a terrific father, and he’ll be a great father going forward.

It certainly looks like we’re in for an exciting episode on Thursday! Check back with CDL for updates on everything Y&R, and for all the soap news, spoilers, and updates.