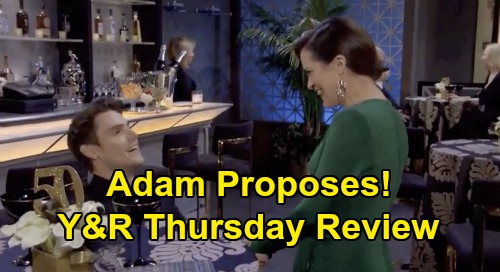 The Young and the Restless spoilers review for Thursday, February 20, tease that the Newman gala will continue as guests mingle after the formal celebration and take in the art installment and the light show. Chance Chancellor (Donny Boaz) will come clean with Abby Newman (Melissa Ordway) about what went down in Las Vegas, and she’ll subsequently confront Phyllis Summers (Michelle Stafford) about the whole thing.

Adam Newman (Mark Grossman), meanwhile, will remain calm and collected even as Chance laments to him that Phyllis could hold onto the recording of them and use it against them at any time.

Adam will say that while Phyllis won this round, she’ll eventually overreach like she always does, and they’ll be able to turn it around on her. Chance will grimace as Adam suggests that Abby sell her shares of the hotel and get out.

Across the room, Sharon Newman (Sharon Case) will reveal to Nikki Newman (Melody Thomas Scott) that she has breast cancer. Nikki will be stunned, and she’ll be reminded of her sister’s struggle with cancer in the past.

Sharon will ask Nikki to help Nick Newman (Joshua Morrow) and the kids as much as she can. Nikki will say that if Sharon could get past all of their battles in the past, then she can beat this too.

Over in the art installation area, Nick will be contemplating some of the artwork as the light show goes on, with the lights dimming periodically. Phyllis will approach, and she’ll wonder if he’s contemplating his complicated history with Victor Newman (Eric Braeden).

Nick will note how she’s digging into his soul, and they’ll flirt a little bit. Phyllis will talk about how Nick “sees” her and knows who she is, and when the lights dim, she’ll lean in for a kiss, then walk away.

In the bar area, Adam and Chelsea Lawson (Melissa Claire Egan) will catch up, and Adam will say that he’s sorry that she had to give up her shares of the Grand Phoenix to Phyllis.

Chelsea will say that she might go back to the fashion design business, but for now Connor Newman (Judah Mackey) needs her. They’ll talk about how important their family is to them, and Adam will say that he wants to make sure he never loses them again.

Chelsea will say that she’s not going anywhere, and Adam will remark that he’s ready to take the vow to make everything official. And with that, he’ll get on one knee and ask Chelsea to marry him. She’ll take in the moment and will tell him happily that she’ll marry him. They’ll embrace as others in the bar area look on.

While all of this is going on, Billy Abbott (Jason Thompson) will chat with Amanda Sinclair (Mishael Morgan) at the Grand Phoenix bar. Amanda will have on a white outfit very similar to the white dress that Victoria Newman (Amelia Heinle) is wearing at the gala.

Billy will remark that the whole town is off kissing Victor’s ring, and he’ll muse about the hypocrisy of it all – Victor has lived on his own terms, but people are trying to criticize him for doing the same thing.

Billy will quickly down a drink, and Amanda will go to leave. Billy will think she’s being distant and will wonder if Nate Hastings (Sean Dominic) had something to do with that.

He’ll then apologize and say that maybe everyone’s right and he is a ticking time bomb. Later, Billy will come back to the lobby decked out in a tux to go to the Newman gala. Amanda will caution him against going.

Billy will leave anyway, and Amanda will follow after him, as someone watches her from across the lobby. Once at the gala, Billy will walk in and order a tequila, with Amanda following after him, and someone following her.

She’ll tell Billy that he needs to leave with her right now, and that he’s drunk. They’ll argue, and Billy will be highly agitated, so she’ll take his face in her hands to calm him down.

Across the way, Ripley Turner (Christian Keyes) will see them together, and he’ll have a very unsettled, angry look on his face. The lights will periodically dim, and as Amanda walks off from Billy, Victoria will enter.

Ripley will then make his move, swiftly moving toward Victoria, whom he thinks is Amanda, and stabbing her once in the side. Billy will see Victoria lurch forward and call out for her. She’ll stumble and fall into Billy’s arms, clutching her stab wound.

We’re definitely in for a riveting episode on Thursday, so don’t miss it! Be sure to stay tuned to the CBS soap and be sure to stick with CDL for the latest Young and the Restless recaps, spoilers, and news.