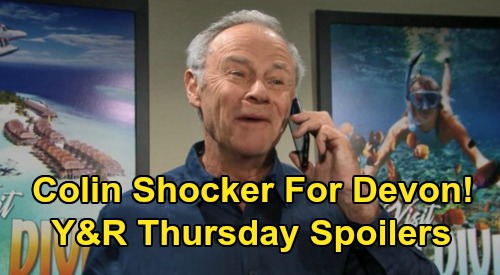 The Young and the Restless (Y&R) spoilers for Thursday, February 27, tease that Devon Hamilton (Bryton James) will get a text that baffles him. Once Devon sees that the caller ID is blocked, Devon’s mind will immediately go to Colin Atkinson (Tristan Rogers). The search for Colin has really been heating up, so Devon will think this mysterious message has Colin written all over it.

Y&R fans can expect Devon to ponder a code that’s in this text. It’ll be a string of numbers that don’t make any sense to Devon, so he’ll hope Chance Chancellor (Donny Boaz) might be able to help. At first, Chance will start barking up the wrong tree. He’ll think maybe these numbers could be some sort of longitude and latitude readings.

Since this meeting will take place at Crimson Lights, Devon and Chance will get a lucky break. Kevin Fisher (Greg Rikaart) will just so happen to be nearby, so Chance will call on him for help.

The Young and the Restless spoilers say Kevin and that sharp brain of his will see a pattern. He’ll begin typing on his laptop while Chance and Devon wonder what it is that Kevin’s looking for.

Once Kevin breaks through some firewalls, he’ll reveal that the numbers are for an offshore bank account. Devon will be taken aback when he realizes it’s in his name. It’ll also have $2.475 billion in it, so Devon will realize his stolen fortune has been returned.

As Devon tries to wrap his head around that bombshell, another text will appear. This one will contain an apology – again, seemingly from Colin. He’ll tell Devon that money can make a person crazy and will call him “mate,” so Devon will assume it’s from the thieving Aussie.

Of course, all of this will still seem strange to Devon. He won’t get why Colin would suddenly give back his billions or why he’d be so apologetic. Colin worked awfully hard to steal that money, so Devon won’t understand this bizarre change of heart.

Although Devon will be pleased to have his fortune back, he’ll fear that there’s some unfinished business when it comes to this whole saga.

Thankfully, Victoria will demand answers about her condition this Friday, so there’s a good chance she’ll start waking up at the end of Thursday’s episode. Y&R spoilers, updates and news say Billy will be relieved, but we’ll see how Victoria feels about this whole dangerous ordeal. It wasn’t Billy’s fault, but there’s no denying that he set it in motion.