BY Heather Hughes on January 15, 2020 | Comments: one comment
Related : Soap Opera, Spoiler, Television, The Young and the Restless 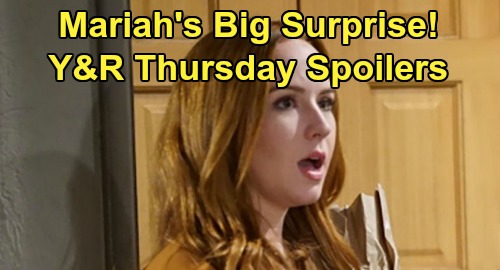 The Young and the Restless (Y&R) spoilers for Thursday, January 16, tease that Billy Abbott (Jason Thompson) will need some guidance. Y&R fans know Billy’s been feeling stifled by Victoria Newman (Amelia Heinle). He doesn’t feel like he can be himself around Victoria or really open up the way he should. Billy’s always afraid Victoria will judge him or try to repair what isn’t broken.

Of course, some might argue that Billy’s at least a little broken! He felt the need to lie to Victoria about the dive bar receipt. Billy feels like he’s crossing the line with Amanda Sinclair (Mishael Morgan) despite their platonic boundaries, so he’s been lying about their friendship, too.

If you’re deceiving your partner, something’s indeed wrong. Something really does need to be fixed – and in this case, it’s Billy’s ability to communicate. He can talk to Amanda just fine, but he’ll seek out a different confidant on Thursday. Lily Winters (Christel Khalil) will lend an ear and try to help Billy as best as she can.

Unfortunately, Billy’s talking to everyone except the one person he really needs to be talking to. He needs to sit down and give Victoria total honesty. Billy has to let his walls down completely, even if it means the end of “Villy.” They can’t continue in this fractured state indefinitely, so let’s hope Billy can suck it up and tackle the problem soon.

Other Young and the Restless Mariah Copeland (Camryn Grimes) will hear from Tessa Porter (Cait Fairbanks) again. Tessa’s been learning the ropes on tour, but she’ll be keeping in touch with Mariah along the way. In Thursday’s Y&R episode, Mariah will be surprised by Tessa’s news. Tessa will offer some interesting updates, so we’ll see if they excite Mariah or leave her with concerns.

Perhaps it could even be a bit of both since Mariah’s trying to be supportive and struggling on her own at the same time. There’ll inevitably be some bumps in the road for this couple, but The Young and the Restless spoilers suggest “Teriah” may come out even stronger on the other side.

Meanwhile, “Chance” Chancellor (Donny Boaz) will have to deal with more of Phyllis Summers’ (Michelle Stafford) pestering. It seems like Phyllis is always in Chance’s face these days. Thursday will bring another round of flirting as Phyllis carries out her latest plan. Phyllis will try to be charming, which isn’t exactly her strong suit! Even so, Chance may find himself growing increasingly intrigued by Phyllis.