The Young and the Restless Spoilers: Thursday, January 30 Recap – Billy Arrested After Barfight, Amanda Bails Him Out – Phyllis Kisses Chance 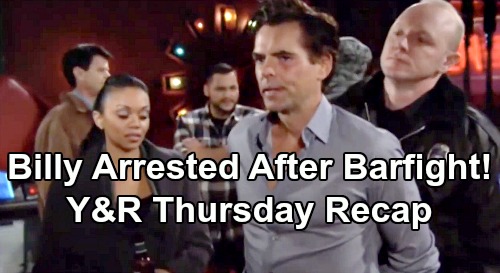 The Young and the Restless (Y&R) spoilers recap for Thursday, January 30, teases that Victoria Newman (Amelia Heinle) will struggle over her breakup. At the ranch, Victoria will be grateful to Nikki Newman (Melody Thomas Scott) for letting her stay there with the kids. She’ll point out that since Billy Abbott (Jason Thompson) left and isn’t coming back, it would be too painful to remain at home tonight.

Despite their different views, Victoria will acknowledge that she cares about Billy. She won’t think things are going to end well for him. Once Victor Newman (Eric Braeden) arrives, he’ll quickly realize a “Villy” split went down. Although Victor won’t be surprised, he’ll be sorry for what Victoria’s going through.

In an effort to help his daughter, Victor will get out the boxing equipment and let Victoria throw some punches. When she’s done, Victoria will break down in Victor’s arms.

Over with Billy, he won’t quite no what to do with himself now that he’s free. Billy will wind up back at the dive bar, where he’ll try to join a poker game. That plan won’t pan out and will actually result in a barfight.

Billy will get a bit banged up before the cops arrive along with Amanda Sinclair (Mishael Morgan). Y&R spoilers say Billy will be arrested and hauled down to the station, so Amanda will bail him out.

Afterward, they’ll talk in Billy’s suite at the Grand Phoenix. Amanda will hear about Billy’s breakup with Victoria and will guess that fight was about punishing himself.

Billy will contend that he needed a way to cover the pain of leaving his family. He’ll feel like he has to move forward and live life to the fullest. As for Amanda, she’ll determine that it’s time for her to leave.

Down in the lounge, Abby Newman (Melissa Ordway) will see “Chance” Chancellor (Donny Boaz) off on his date with Phyllis Summers (Michelle Stafford). She’ll tell Phyllis not to do anything she wouldn’t do.

At Society, Phyllis will do plenty of flirting. Chance will hope Phyllis isn’t going to grill him about Adam Newman (Mark Grossman), but she’ll insist she has no ulterior motive – although she wouldn’t be opposed to learning Chance’s secrets.

Talk will eventually turn to Vegas, but Chance will just joke around with a story about Wayne Newton.

After Summer Newman (Hunter King) texts Phyllis, she’ll let Chance know she needs to take off. Chance will wish Phyllis good luck with Vegas and with her daughter.

Before Phyllis heads out, she’ll plant a steamy kiss on Chance and shove him back once their lips part. Phyllis will tell Chance “see ya later” before sauntering off.

Back at the Grand Phoenix later, Abby will want updates on Chance’s date with Phyllis. He’ll note that Phyllis had to go deal with her daughter. Chance will ask why they’re talking about Phyllis anyway, which will leave Abby looking pleased.

At Crimson Lights, Summer will spill the San Francisco story to Phyllis. She’ll admit she kissed Kyle, who kissed back before he pulled away.

Phyllis will remind Summer that she shouldn’t be a second choice. She’ll think Summer needs to sit back and let Kyle’s marriage blow up on its own.

However, Summer will admit she’s still in love with Kyle and can’t just wait around anymore. She won’t think their connection has ever gone away – and she’ll want to see where it could lead.

Although Summer won’t be sure of what her next move should be, she’ll be supported by Phyllis no matter what.

At Jabot, Kyle will make a confession to Jack Abbott (Peter Bergman). He’ll tell Jack that he thinks he’s screwing up his marriage, but Jack will think they can get through the rough patch.

Jack will ask if Theo Vanderway (Tyler Johnson) is the reason for Kyle’s issues with Lola Abbott (Sasha Calle), but Kyle will think there’s more to it than that. This is really about Kyle and how he feels.

The Young and the Restless spoilers say Kyle will mention Summer’s questions. She asked if he was happy…if Kyle and Lola got caught up in the romance of it all…

Kyle will wonder if maybe they didn’t fully consider who they were and who they were together. He’ll suggest that for all he knows, Lola may be wondering the same thing.

Jack will contend that Kyle needs to ask Lola and be honest about his own feelings as well. Since Summer stirred up all this for Kyle, Jack will note that some old loves never go away. He’ll wish his son luck – and Kyle’s clearly going to need it!