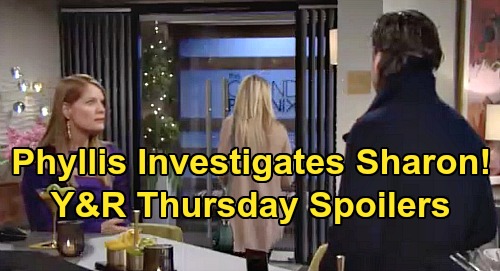 The Young and the Restless (Y&R) spoilers for Thursday, January 30, tease that Victor Newman (Eric Braeden) will think someone needs to learn a valuable lesson. Could that lesson involve not breaking his daughter’s heart repeatedly? If Victor gets updates on Billy Abbott’s (Jason Thompson) decision to walk out on Victoria Newman (Amelia Heinle), Billy could certainly be on the receiving end of this lesson.

Y&R viewers know Victor warned Billy after he tried to run down Adam Newman (Mark Grossman). Since Adam made some big mistakes as well – like messing with his father’s meds – Victor decided they both deserved a clean slate.

He gave Billy another chance along with Adam, but he suggested he wouldn’t be so forgiving if Billy screwed up again.

Putting Victoria through another round of heartache would definitely qualify as a mistake in Victor’s eyes. Billy’s the one who relentlessly pursued Victoria and fought so hard for this reunion.

Victoria had plenty of reservations, but Billy just kept pushing and pushing. He was determined to put their family back together, but now he’s the reason it’s crumbled again.

Victor could easily teach Billy a lesson for that – which might explain why Billy’s banged up in this week’s The Young and the Restless promo. Will Victor send someone to beat Billy up a bit? That’s one option to consider.

Then again, Victor’s lesson may not be that extreme. There could be another reason for Billy’s dangerous run-in, which will happen at some point this week.

It’s also possible Victor’s lesson will be for Amanda Sinclair (Mishael Morgan). He’s been doing research for a while now and receives more Amanda ammo on Wednesday.

In Thursday’s episode, Victor might present some information to Amanda and deliver a threat of some sort.

Like Billy once pointed out, their friendship seemed more like an affair to those on the outside looking in. Victor might confront Amanda and hold her partially responsible for his daughter’s pain. Whatever the case, Victor will be fuming while Victoria battles a broken heart.

Elsewhere, Phyllis Summers (Michelle Stafford) will think it’s time to prioritize. She’s perhaps the nosiest person in Genoa City, so she may have to juggle all her attempts to score secrets.

Phyllis still wants to know exactly what went down in Vegas, so she’ll keep trying to grow closer to “Chance” Chancellor (Donny Boaz).

However, Phyllis will remain curious about Sharon Newman (Sharon Case), too. Sharon is overly generous and sincere to Phyllis on Wednesday – at least that’s how it feels to Phyllis! She can’t figure out what brought on this attitude adjustment, but Phyllis may get another crucial clue on Thursday.

The Young and the Restless spoilers say Phyllis will spot a bandage on Sharon soon, which will get the wheels turning. She’ll add up a few other suspicious puzzle pieces and eventually figure out Sharon may be ill. It sounds like Phyllis the queen snooper will have to figure out how to proceed from there.

Y&R fans won’t want to miss the twists and turns ahead. We’ll keep you posted as other news comes in. Stay tuned to the CBS soap and don’t forget to check CDL often for the latest Young and the Restless spoilers, updates and news.