BY Heather Hughes on January 28, 2020 | Comments: one comment
Related : Soap Opera, Spoiler, Television, The Young and the Restless 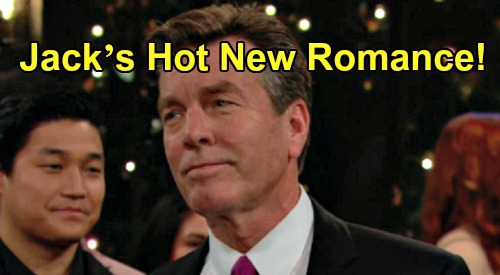 The Young and the Restless (Y&R) spoilers tease that Jack Abbott (Peter Bergman) will get the scoop on his son’s marriage troubles. Kyle Abbott (Michael Mealor) will fill Jack in on the tension he’s facing in his relationship with Lola Abbott (Sasha Calle). Of course, Kyle will probably leave out the part about his kiss in San Francisco with Summer Newman (Hunter King)!

Nevertheless, Kyle will tell Jack enough to get some advice – although Jack isn’t exactly the doctor of love these days. It’s been quite a while since Jack had someone special in his life. Kerry Johnson aka Dominique Caroll (Alice Hunter) lied to Jack and left him feeling betrayed. He was undoubtedly a bit jaded afterward, although we’d say that split was for the best.

Kerry and Jack wanted different things out of life. She was a great deal younger than Jack and was still considering the idea of starting a family someday. Jack’s done all that and needs someone who’s in his stage of life. He could also use someone who values honesty and respects him, but there aren’t a lot of available women who check all the right boxes.

The Young and the Restless spoilers say Jack will reflect on his floundering love life in an upcoming episode. He’ll feel somewhat stuck since all roads lead to nowhere when it comes to women. At one point, it looked like Jack and Lauren Baldwin (Tracey E. Bregman) might be poised for an affair. That plan was seemingly scrapped, but Celeste Rosales (Eva LaRue) also showed interest in Jack.

Alas, Celeste went back to Miami and that romance never panned out either. Jack even connected with a woman named Mallory, whose father was at Dina Mergeron’s (Marla Adams) memory care facility. Sadly, Mallory’s dad passed away and she moved to be closer to her children.

Y&R keeps shutting down all Jack’s options, but maybe things are about to turn around. The Young and the Restless spoilers say there’ll be a new push for romance in Jack’s life soon. He’ll determine that he really wants to find that special someone, but he’ll struggle to make it happen.

Jack will be feeling somewhat lost, but maybe the perfect woman will show up when he least expects it – or maybe she already has! Y&R’s made an effort to keep Celeste’s name in the mix in recent months. She even worked with Jack on a special project at Christmas, which involved some surprise ornaments for Kyle and Lola. It sounds like Jack and Celeste are keeping in touch, so that could be a good sign.

It’s possible Celeste will make a comeback down the road. She had some nice chemistry with Jack, so that might be the way to go. Then again, The Young and the Restless might cast a different love interest or even have Jack change his mind and stay single until “Red” becomes available. “Phack” fans are holding out hope that Jack and Phyllis Summers (Michelle Stafford) might reunite eventually.

Whatever the case, Jack will try to put himself back out there in the coming weeks. It’ll be interesting to see how that works out for him! We’ll give you updates as other Y&R news emerges. Stay tuned to the CBS soap and don’t forget to check CDL often for the latest Young and the Restless spoilers, updates and news.