The Young and the Restless Spoilers: Thursday, March 5 Recap – Sharon Desperate ER Trip – Billy Gets Into Bed With Amanda

BY Heather Hughes on March 4, 2020 | Comments: one comment
Related : Soap Opera, Spoiler, Television, The Young and the Restless 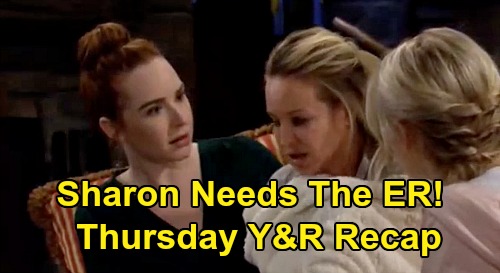 The Young and the Restless (Y&R) spoilers recap for Thursday, March 5, teases that Billy Abbott (Jason Thompson) will face resistance from Amanda Sinclair (Mishael Morgan). He’ll reflect on how he’s happy when he’s with Amanda. Billy will think Amanda deserves happiness as well, but she won’t know how she can be his answer to anything. Amanda will be overwhelmed by all the drama that’s gone down.

After Billy buys some snacks from the vending machine, Amanda will talk about her hatred for Ripley Turner (Christian Keyes). It’ll still be hard to wrap her head around the fact that he wanted to kill her. Amanda will confess that she was taking her anger out on Billy. He’ll play up their bond and suggest a fresh start, but Amanda will remain apprehensive.

Billy won’t think they need to make any major decisions about the future tonight. He’ll decide to sleep on the sofa, but Amanda will have a nightmare and need his support. Billy will move over to the bed and cozy up to Amanda as he comforts her.

Other Young and the Restless spoilers say Chloe Mitchell (Elizabeth Hendrickson) will panic about the baby coming too soon. Kevin Fisher (Greg Rikaart) will agree and plead with their unborn child, but good news will arrive once he speaks with Chloe’s doctor.

Once Kevin and Chloe are in bed, Michael Baldwin (Christian LeBlanc) and Lauren Baldwin (Tracey E. Bregman) will make love under a sheet downstairs. They’ll get busted by Chloe once she reenters and cries out. Kevin will appear to see what’s wrong and will bicker with Michael briefly. As Kevin and Chloe leave the room again, Michael will yell that it’s the best storm ever.

At the new clinic, Devon Hamilton (Bryton James) will hear something outside along with Nate Hastings (Sean Dominic) and Elena Dawson (Brytni Sarpy). It turns out it’s Jared (Michael Maclane), a young man who has a stab wound on his arm.

Jared won’t be keen on accepting assistance, but Elena and Nate will insist they’re doctors and can help. They’ll bring Jared up to speed on the clinic they’re opening.

While Jared’s wound is treated, he’ll explain that he was closing up his grandfather’s shop when he got robbed. Jared cut himself on a piece of jagged metal, so Elena and Nate will want him to get a tetanus shot at the hospital tomorrow.

After Jared takes off abruptly, Elena will vow to find him later and hopefully convince him to accept more help. She’ll feel like there are plenty of people out there just like Jared. Elena will be eager to do some planning and focus on providing much-needed assistance.

Afterward, Devon will confess that he’s been thinking about the baby he was supposed to have with Hilary Hamilton (Mishael Morgan). The kid would’ve been a toddler by now. Elena will let Devon know he’d be a good dad and offer some comfort.

At Sharon Newman’s (Sharon Case) house, Mariah Copeland (Camryn Grimes) will remain down about her blowup with Tessa Porter (Cait Fairbanks). She’ll assume Tessa’s back on the jet with Tanner Watts (Chase Coleman) trying to fly away from her.

Sharon will point out that a plane couldn’t get out in this weather, so Faith Newman (Alyvia Alyn) will suggest Tessa might be off writing a song somewhere.

Sharon will struggle as she heads upstairs, which will add to Faith’s concerns. While they’re alone, Mariah will encourage Faith to share how she’s feeling. Faith will hate that all she does is worry. She’s just so scared and wants everything back how it used to be. Mariah will get where Faith’s coming from and pull her little sis closer for a hug.