BY hellodrdavis on March 5, 2020 | Comments: one comment
Related : Soap Opera, Spoiler, Television, The Young and the Restless 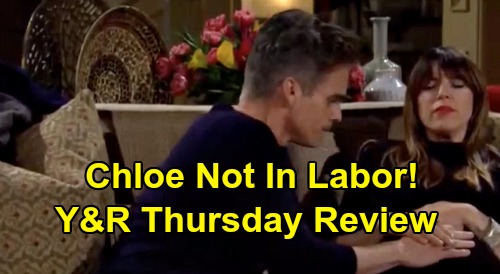 The Young and the Restless spoilers review for Thursday, March 5, tease that the big ice storm will rage on, trapping several groups of people together. At the Grand Phoenix, Billy Abbott (Jason Thompson) and Amanda Sinclair (Mishael Morgan) will talk in her hotel suite. He’ll tell her that he wasn’t looking for anyone or anything when they met, but he just kept coming back because of her. He’ll say that she makes him happy, and that she deserves to be happy, too.

Amanda will wonder how he thinks that she could be his answer to anything right now, and he’ll deflect by saying that she needs to eat something. After an unsuccessful call to room service, he’ll head to the vending machines and return with a bag full of junk food. She’ll apologize for taking out her rage over Ripley Turner (Christian Keyes) on him, and they’ll sit on the bed together and eat.

Billy will note that they’re in a different place now than they were when they first met, and they could try a fresh start. He’ll note that she was the first person in a very long time that he was honest with, but that they don’t have to make any decisions tonight. She’ll ask him to stay on the couch, and he will, until she has a nightmare about Ripley. He’ll then join her on the bed and comfort her as she goes to sleep.

Next, across town at the Chancellor mansion, Kevin Fisher (Greg Rikaart), Michael Baldwin (Christian LeBlanc), and Lauren Baldwin (Trace E. Bregman) will rally around Chloe Mitchell (Elizabeth Hendrickson) as she continues to have contractions. Soon, after a call with the doctor, Kevin will learn that they’re simply Braxton-Hicks contractions and everything’s going to be fine.

Chloe and Kevin will head to bed, and Michael and Lauren will be feeling naughty and will end up getting intimate in the living room by the fire. Later, Chloe will wander through the living room after getting something from the kitchen, followed by Kevin, who will be horrified to see his brother and Lauren in a compromising position. That will cause a humorous exchange, and Michael and Lauren will get a good laugh out of it.

Meanwhile, on the new episode of Y&R on Thursday, March 5, Devon Hamilton (Bryton James), Elena Dawson (Brytni Sarpy), and Nate Hastings (Sean Dominic) will be stranded at the New Hope clinic. After hearing a noise, Devon will go out to investigate and will bring in a young man named Jared (Michael Maclane). Turns out, he’ll have been chased by two other guys, who Devon scared off.

Jared will have a gash on his arm and will be pretty quiet for a while, until the trio gets him to open up and tell the story of how his grandfather’s store got robbed and he got jumped. Nate and Elena will want him to get a tetanus shot, and they’ll urge him to stop by the hospital tomorrow, but they’ll realize that he probably won’t. Jared will take off, and Devon will follow him, snapping a picture of his address in the process.

Elena will vow to check on Jared and his grandfather tomorrow, and she’ll be excited that they had their first patient. Later, after Nate’s asleep, Devon will share with Elena that he’s been thinking about the baby he would have had, who would be a toddler now. He’ll say that he misses the child even though he never met him or her, and he’ll wonder if he’d be a good dad. Elena will say that with a heart like his, he’d be the best dad ever.

Faith will admit to Mariah that she’s not doing so great, and that she does marathon internet searches about cancer and constantly texts Nick Newman (Joshua Morrow) for updates on how Sharon is doing. She’ll admit to thinking a lot about all the what ifs, and Mariah will comfort her as best she can. They’ll discuss their different ways of coping and have some good sister bonding time.

Sharon will then hobble down the stairs looking absolutely terrible, and Mariah and Faith will help her to the couch. Sharon will be cold and nauseated, and she’ll be terribly worried about being too sick to undergo her next chemo session. Mariah will wonder what happens if Sharon has a fever, and Sharon will say that they’ll have to either get in touch with someone from her care team or go to the ER. Faith will run to get a thermometer while Mariah holds Sharon.

It appears that we’re in for a great episode of Y&R on Thursday! Stay tuned, and we’ll give you updates as more Young and the Restless news comes in. Keep on watching the CBS soap and make sure you check back with CDL for the latest Y&R spoilers and news.