The Young and the Restless Spoilers: Traci Abbott, See What’s Next – Beth Maitland Reveals the One Thing Her Character Will Never Do

BY Heather Hughes on February 12, 2020 | Comments: one comment
Related : Soap Opera, Spoiler, Television, The Young and the Restless 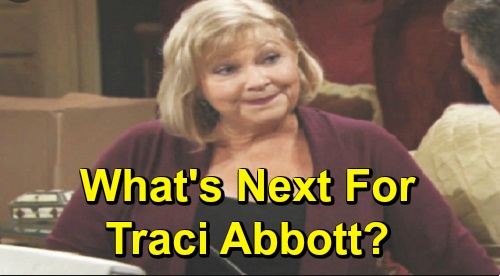 The Young and the Restless (Y&R) spoilers reveal that there’s one CBS soap star viewers always want to see more of. Beth Maitland is a fan favorite as Traci Abbott in Genoa City, but we don’t see her nearly as often as we should! What might Y&R have in store next for Traci? Let’s hope she gets a juicy story of her own somewhere down the line.

In the meantime, Traci will undoubtedly weigh in on some family disasters and troubling updates. She may have some words of wisdom to pass along regarding Kyle Abbott (Michael Mealor) and Lola Abbott’s (Sasha Calle) breakup. There’s also the matter of Billy Abbott (Jason Thompson), who’s making questionable choices and spinning out a bit – even if he doesn’t agree that’s what’s happening.

Despite Traci’s role as resident advice-giver, there’s one thing she won’t do: judge. Maitland spoke to Soaps in Depth recently about her past, present and future at The Young and the Restless. She pointed out that lack of judgment was always important to her and explained why. It turns out Maitland relates to Traci and it seems that’s shaped her view of the character.

“I haven’t been through Traci’s struggles exactly, but I have found that life certainly hands out things that you don’t expect,” Maitland said. “It’s not easy for anyone…So, judgment can’t be a factor in our lives or in my portrayal of Traci. Judgment shuts down people, and Traci’s purpose is to keep everyone open and thinking.”

As for Traci’s guidance, Maitland thinks her character’s earned the right to dish it out. The Young and the Restless needs a moral compass, so she’s grateful that Traci gets to be the heart of GC. Whenever Traci hears news about all the happenings in town, she’s always going to be fair and kind in her assessment.

“She learned with hard knocks and had a different experience than her gorgeous sister and her handsome brother,” Maitland said. “Traci struggled to find her way, so now she’s someone who has earned her place honestly and can give advice. She can be trusted.”

Maitland also talked about what a joy it is to connect with Y&R fans on social media and give them updates along the way. She loves that so many viewers have gone on this journey with her – and we’re glad the journey’s continuing. The Young and the Restless spoilers say there’s much more Abbott drama ahead, so Traci will certainly get mixed up in it. Stick with CDL so you won’t miss all the latest news!