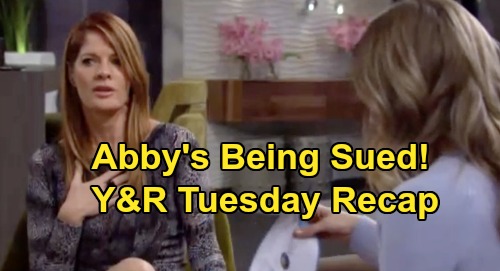 The Young and the Restless (Y&R) spoilers recap for Tuesday, February 25, teases that Abby Newman (Melissa Ordway) will have a plan to neutralize Phyllis Summers (Michelle Stafford). Chance Chancellor (Donny Boaz) will worry Abby intends to give up the Grand Phoenix, but Abby will have a different strategy in mind. She’ll hope this will stroke Phyllis’ ego and put the hotel battle to rest.

At the newly renovated Crimson Lights, Y&R spoilers say Phyllis Summers (Michelle Stafford) will work on a plan of her own. She’ll tell someone on the phone that she wishes there were more people like him or her. Phyllis will talk about fighting the good fight before offering her gratitude.

Nearby, Amanda Sinclair (Mishael Morgan) will battle more guilt over what happened to Victoria Newman (Amelia Heinle). She’ll let Rey Rosales (Jordi Vilasuso) know Ripley Turner (Christian Keyes) hasn’t been in touch. Amanda will hate that she misjudged what Ripley was capable of, but Rey won’t think any of this is her fault.

Billy Abbott (Jason Thompson) will echo that idea after Rey exits. If Billy had just taken Amanda’s advice, all the gala drama would’ve been avoided. Amanda will think her connection to Billy has caused serious issues. Now that people have been hurt because of it, Amanda will intend to keep her distance.

They’ll understand that eliminating her Internet presence was about Ripley, not Colin. Elena will feel like Amanda must’ve taken the case to get out of Madison.

Devon will fret about Amanda still being at risk before Chance shows up. He’ll have some news about Colin to pass along. It turns out Colin was seen in Luxembourg, but he managed to make a break for it again. Devon will steer the conversation to Ripley and making sure he’s apprehended.

At Society, Mariah Copeland (Camryn Grimes) will talk to Lindsay (Kirby Bliss Blanton) the bartender about her job hunt. She’ll note that Devon referred her to a job recruiter before Theo pops up.

Theo will needle Mariah about her lack of employment, but she’ll want him to get lost. After Theo tries to smooth things over, he’ll think Mariah should try to get in with Tanner Watts’ (Chase Coleman) people.

Theo will show Mariah a picture to illustrate what he views as a smart social media strategy. Mariah will look unnerved by the pic of Tanner with his arm around Tessa Porter (Cait Fairbanks).

Theo will suggest that it’s all about starting some fake feud with Tanner’s actual girlfriend and getting the fans to fall for it. He’ll think it’s going to help the rack up more downloads and publicity.

Afterward, Mariah will speak with Tessa via video chat. When a shirtless Tanner joins the conversation, he’ll make jokes about everyone calling them a new powercouple. Tanner will eventually suggest he can take a hint and will give them some alone time.

Once Tanner’s gone, Mariah will ask Tessa if they’ve slept together. Tessa won’t understand where any of this is coming from. Mariah will snap that Tessa still hasn’t answered the question, but Tessa won’t think she should have to. She’ll feel like Mariah should know she hasn’t been cheating, but Mariah will get riled and disconnect.

Theo will seek updates soon after, but Mariah will make it clear that they’re not friends. As Mariah leaves with Lindsay, Theo will look pensive. At the Chancellor mansion, Jill Abbott (Jess Walton) will talk to Billy about his recent split from Victoria. They’ll ultimately settle on the topic of a job for Billy – and Jill will have one in mind.

Jill will want Billy to run a new media division of Chancellor Industries, but he’ll feel like she’s making this up for his sake. However, Jill will protest that she needs Billy’s help to make Chancellor relevant again. She could help him compete with Newman Enterprises. Billy will point out that people who trust him usually get burned, so he’ll turn down the offer for now.

At the Grand Phoenix, Abby will make an enticing offer. She’ll be willing to pay Phyllis three times what her shares are worth to buy her out. Phyllis will decide she needs some time to mull it over. Once Phyllis is gone, Abby will speak with Amanda about beefed-up security and still comatose Victoria.

When Nate Hastings (Sean Dominic) comes along later, Amanda will wish he could guarantee Victoria would be OK. Talk will turn to Amanda’s plans. She’ll believe she needs to go into hiding and keep everyone else out of danger, but Nate will convince her to stay in town.

Back with Abby, she’ll tell Phyllis that her offer’s only available for a limited time. Suddenly, a man will approach with a delivery for Abby. She’s been served! Abby will be stunned when she realizes a former guest is suing her. A smug Phyllis will think Abby should hand over the hotel and get out while she can.