BY hellodrdavis on February 4, 2020 | Comments: one comment
Related : Soap Opera, Spoiler, Television, The Young and the Restless 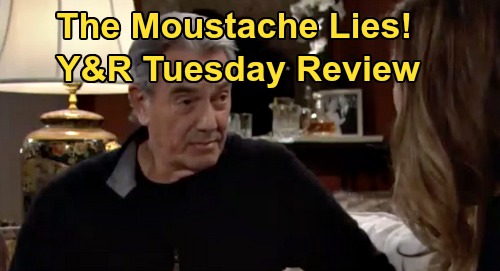 The Young and the Restless spoilers review for Tuesday, February 4, tease that Billy Abbott (Jason Thompson) will arrive at the Newman ranch with the intention of visiting his kids, but he’ll be intercepted by Victor Newman (Eric Braeden), who will say that’s not happening.

Billy will immediately get irritated and fuss with Victor, which will prompt Victor to start yelling and berating Billy for breaking Victoria Newman’s (Amelie Heinle) heart again. Victor will throw Billy out, and Billy won’t see his kids.

Billy will then head to Newman Enterprises to see Victoria, finding her there with Nick Newman (Joshua Morrow). Nick will grump at Billy on his way out, then Victoria will coldly interact with him, pointing out that he shouldn’t be seeing the kids with his black eye.

She’ll snark at him about Amanda Sinclair (Mishael Morgan) and the bar fight, and Billy will realize that Victor was having him followed. They’ll leave things on bad terms.

Later, Victoria will arrive at the ranch, and Victor will offer her support as she laments about having to tell the kids about her split with Billy. Victor will then tell her that what Billy has done goes beyond what she thought.

He’ll proceed to tell her that Billy and Amanda visited a motel regularly, and that he has the receipts to prove it. Victoria will be distraught, and she’ll angrily call Billy to say that they need to meet to talk about what’s going to happen with the kids.

It certainly looks like Victoria is going to try to restrict Billy’s access to their kids, but what’s this about Victor having evidence of hotel meetings between Billy and Amanda?

Y&R viewers know that the two haven’t been intimate or met in hotel rooms, other than meeting at the Grand Phoenix on a couple of occasions when it was all business. It certainly didn’t seem like Victor was purposely lying to Victoria, either, so it seems that something’s awry here.

According to Y&R spoilers, Amanda’s ex, Ripley Turner (Christian Keyes) will soon be in town, so could he possibly have rented rooms under Amanda’s name, and that’s what Victor’s private investigator found?

We’ll see what happens here, but something’s going on, because Billy and Amanda have just interacted as friends thus far. Fans must be asking themselves if The Moustache will never learn after all the pain he’s caused his family in the past.

Meanwhile, on the new episode of Y&R on Tuesday, February 4, Mariah Copeland (Camryn Grimes) will have a difficult day. First, she’ll have a video chat with Tessa Porter (Cait Fairbanks), who will still be on the road with Tanner Watts (Chase Coleman).

The call will go well, although Tessa will sense that something’s wrong with Mariah. Mariah will be showing stress related to the secret she’s keeping about Sharon Newman’s (Sharon Case) cancer diagnosis.

Mariah will talk a bit with Lindsay (Kirby Bliss Blanton) at the bar, sharing that it’s getting harder not talking about what’s going on with her friend, meaning Sharon.

Lindsay will note that Mariah has a really nice smile and that she should show it more often, although Mariah won’t quite catch on that Lindsay is attracted to her. Devon Hamilton (Bryton James) will then arrive to say that he needs to have a difficult conversation with Mariah.

On Tanner’s jet, he’ll inform Tessa that his reps are clamoring for him to get a meeting with her because they’re interested in representing her. Tessa will then directly ask Tanner if he’s hoping that they’ll reconnect, and he’ll say no, that he respects her relationship with Mariah and their friendship.

After establishing that, Tessa will say that while she’ll never fire Mariah and Devon, it wouldn’t hurt to hear his people out.

Interestingly, the initial concern for Mariah and Tessa as a couple was that Tessa would be on tour with her ex, and that he might decide that he wants to rekindle things with her. But it certainly doesn’t look like that’s the case.

Rather, it’s looking like Mariah could be the one who could start to develop an attraction…perhaps to Lindsay. Even though Mariah was too distracted to notice, it does seem lie Lindsay was flirting a bit. We’ll see where this leads.