BY Heather Hughes on February 3, 2020 | Comments: one comment
Related : Soap Opera, Spoiler, Television, The Young and the Restless 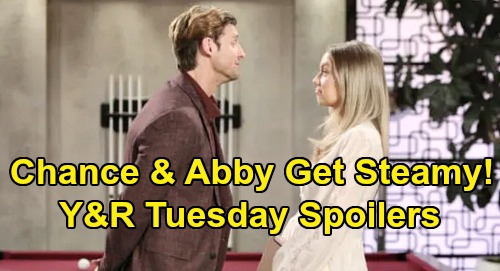 The Young and the Restless (Y&R) spoilers for Tuesday, February 4, tease that Victor Newman (Eric Braeden) will send a clear message to Billy Abbott (Jason Thompson). Y&R fans know Victor isn’t pleased with “Billy Boy” for breaking Victoria Newman’s (Amelia Heinle) heart. Family is very important to Victor, but he feels like Billy’s a selfish punk who walked out on his own.

To be fair, that’s a pretty accurate description of Billy these days. It’s all about “me, me, me” for Billy, but what about his children? What about Victoria, who was wary of letting Billy have her heart again in the first place?

Victor will think Billy deserves to be taught a lesson, so he’ll do his best to teach it on Tuesday. He’ll deliver a warning that hopes will put some fear in Billy, but Billy doesn’t seem afraid of anything anymore.

Instead, Billy’s reckless and poised for more trouble – at least in the eyes of those closest to him. It’ll be interesting to see what happens to Billy after he finishes finding himself. In the meantime, Billy and Victoria will face more conflict.

Billy and Victoria will have a meeting within the next couple episodes to discuss how to handle things with the kids, but that meeting will be derailed by Amanda Sinclair’s (Mishael Morgan) arrival.

Other Young and the Restless spoilers say “Chance” Chancellor (Donny Boaz) will feel like he made the right choice. He recently assured Abby Newman (Melissa Ordway) that she’s the one he wants, so she’s feeling good about the situation, too.

Now that they’ve decided to move forward, they should be ready to take a big step. Sparks are set to fly, so Abby and Chance will likely make love on Tuesday.

Of course, you can never really count Phyllis Summers (Michelle Stafford) out of the game, now can you? Phyllis has accepted defeat for now, but that doesn’t mean she won’t come sniffing around later.

There’s also that Vegas secret to think about. It’s obviously something terrible, so Chance may struggle to explain once Abby finds out what it is. For now, Chance and Abby will continue their love story with a steamier chapter.