The Young and the Restless Spoilers: Victoria and Billy’s Custody Battle – Proof of Amanda Affair Adds to Billy’s Problems

BY Heather Hughes on February 1, 2020 | Comments: one comment
Related : Soap Opera, Spoiler, Television, The Young and the Restless 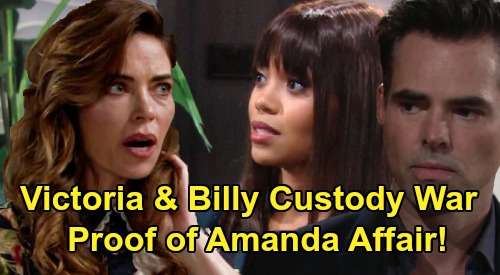 The Young and the Restless (Y&R) spoilers tease that Billy Abbott (Jason Thompson) and Victoria Newman (Amelia Heinle) will have some important details to nail down. They recently split due to Billy’s need for freedom, but there’s one responsibility he can’t turn his back on.

Billy and Victoria’s kids are bound to be confused and upset, but they have to figure out a way to help Johnny Abbott (Holden and Ryan Hare) and Katie Abbott (Sienna Mercuri) handle this transition. By now, the kiddos are probably used to Mommy and Daddy’s drama.

Nevertheless, it’s crucial to figure out a game plan and settle on how much time the kids will spend with each parent. Victoria may assume Billy won’t have much time left between finding himself and hanging out with Amanda Sinclair (Mishael Morgan).

This could lead to a custody battle if they aren’t careful! Victoria won’t be so sure this free and reckless Billy can be a good father anyway.

During this conversation at Crimson Lights, Victoria will have a photo she saw of Amanda and Billy on her mind. Of course, it’s one that Victor Newman’s (Eric Braeden) private investigator took.

Victoria will accuse Billy of lying about the true nature of their relationship. She won’t think it looked so platonic, but he’ll be adamant that nothing besides talking and listening went down.

Victoria won’t be convinced, so Billy will get defensive and this will turn into quite the coffeehouse sparring session. That’s when Amanda herself will walk through the door.

The Young and the Restless spoilers say Amanda’s timing couldn’t be worse! She’ll soon find herself at the center of this big confrontation, which isn’t going to help Billy at all.

Despite Amanda and Billy’s insistence that nothing inappropriate went down, Victoria will view the evidence she has as proof. She’ll insist they’ve been having an affair and refuse to accept that’s not the case.

Amanda will understand why Victoria got the wrong idea, but she’ll grow increasingly frustrated over this whole situation. They didn’t cross any lines, so she won’t like being thought of as “the other woman.”

Y&R spoilers say Billy and Amanda will be confused about this so-called evidence of their infidelity, but Victoria won’t divulge details about Victor’s investigation. She’ll simply stomp off and leave them to mull all this over. This could bring more tension to their friendship, but some game-changers are coming up soon.