The Young and the Restless Spoilers: Tuesday, January 14 Recap – Sharon Gets Cancer Phone Call – Devon Says No Mercy for Cane 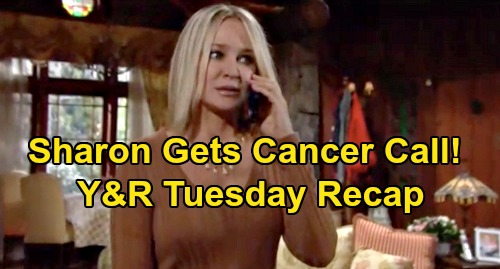 The Young and the Restless (Y&R) spoilers recap for Tuesday, January 14, teases that Lily Winters (Christel Khalil) will be back in town. Sharon Newman (Sharon Case) will walk over to chat with Lily, who’ll be with Jill Abbott (Jess Walton) at Crimson Lights. After Sharon steps away, Lily will let Jill know that nobody blames her for Colin Atkinson’s (Tristan Rogers) scam.

Since Charlie Ashby (Noah Alexander Gerry) and Mattie Ashby (Lexie Stevenson) are visiting Cane Ashby (Daniel Goddard) in Europe, Jill will suggest Lily could go join them. Lily will decline and point out that she’s dating again. No matter who Lily’s with, Jill will suggest she’s always going to consider her family.

Back with Sharon, she’ll be cornered by Rey Rosales (Jordi Vilasuso) – who’ll want to take a trip to Miami. Sharon will note that she should check with Nick Newman (Joshua Morrow) and Faith Newman (Alyvia Alyn Lind) about it first.

After Rey exits, Sharon will check her phone for the call she’s waiting on. When she realizes there’s been no word from the doctor yet, Sharon will opt to head home and wait.

At the cottage, that long-awaited call will finally come in. Y&R spoilers say Sharon will ask if her biopsy results came back. Afterward, Rey will walk in and notice Sharon seems jumpy.

Sharon will ultimately admit she has something she needs to tell Rey. Since we know Sharon indeed has cancer, she’ll drop that bomb on Rey this Wednesday.

In the meantime, Devon Hamilton (Bryton James) will meet up with Mariah Copeland (Camryn Grimes) at Society. They’ll chat about Tessa Porter’s (Cait Fairbanks) tour and how Mariah doesn’t feel like she’s great at being supportive.

Devon will ask if Mariah’s concerns are about Tessa being on tour with her ex-husband, but Mariah will shut down that idea. She’ll insist she just misses Tessa now that she’s out on the road.

Devon will talk about Power Communications, Colin as well Devon’s relationship with Elena Dawson (Brytni Sarpy) before circling back to Tessa. As for Tessa herself, she’ll be on Tanner Watt’s (Chase Coleman) jet going over the set list. Tanner will offer some guidance on song order, but he’ll want Tessa to remember to have fun.

Tessa will acknowledge that she sometimes forgets Tanner’s a big star. Tanner will be glad to have someone around who can give him a kick in the pants when he’s getting too full of himself.

Later, Tessa will touch the necklace Mariah gave her and reflect on messing things up for them a lot. She’ll note that they’re in a good place now.

Tanner will talk about how people can sometimes slip up if they get bored and lonely. Tessa will firmly reply, “Not me.” Tanner will think that’s good since they don’t need the drama.

They’ll eventually start working on some songs and will exchange advice. Afterward, Tessa will give Mariah a call and they’ll express how much they miss each other.

At Newman Enterprises, Victoria Newman (Amelia Heinle) will open up to Nikki Newman (Melody Thomas Scott) about Billy Abbott’s (Jason Thompson) exhausting issues. She’ll explain that Billy stopped therapy and is playing up his wild side.

Nikki will see the situation from both perspectives and will think Victoria should concentrate on her own needs. Victoria will just worry about what else Billy might be hiding.

At the Grand Phoenix, Amanda Sinclair (Mishael Morgan) will open up to Billy about some work issues. She’ll feel like people are afraid to hire her since they might offend Devon.

Billy will understand the frustration of being judged. He’ll talk about how he clams up when it comes to Victoria. Billy won’t be sure he can be Victoria’s rock like he promised.

Amanda will assure Billy that he’s not broken and doesn’t need to be fixed. Billy will appreciate the kind words and give Amanda a kiss on the cheek as he leaves. At home, Victoria will find a dive bar receipt for two glasses of whiskey. When confronted, Billy will lie that he met up with a client there.

At Devon’s penthouse, The Young and the Restless spoilers say he’ll catch up with Lily while she’s in town. They’ll joke about her love life, but Lily will realize Devon isn’t eager to discuss the Colin investigation details. She’ll think he doesn’t want to talk to her about it since he still suspects Cane.

Devon will think Cane would deserve prison if it comes out that he was involved. He’ll wonder how Lily would feel about that, but she’ll contend that maybe Cane could work out a deal with Michael Baldwin (Christian LeBlanc).