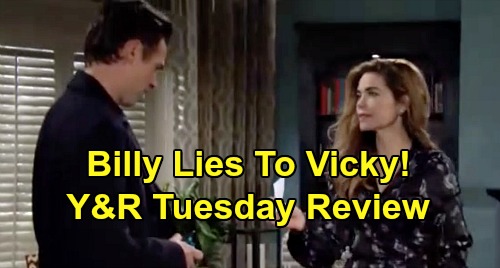 The Young and the Restless spoilers review for Tuesday, January 14, tease that Lily Winters (Christel Khalil) will be back in Genoa City for a visit. She and Jill Abbott (Jess Walton) will catch up at Crimson Lights. As Sharon Newman (Sharon Case) brings them coffee, they’ll acknowledge that it was a tough holiday without Neil Winters (Kristoff St. John), and that will deeply affect Sharon, who will be waiting for the results from her biopsy.

Lily and Jill will talk about the situation with Colin Atkinson (Tristan Rogers), and Lily will be sorry to hear that he hurt Jill again. The topic of Cane Ashby (Daniel Goddard) will come up as well, and when Jill suggests that Lily join him and the twins in Europe, Lily will reveal that she’s moved on and is dating again.

Jill will wish her well and say that she’ll always consider Lily to be family.

Meanwhile, on the patio, Rey Rosales (Jordi Vilasuso) will arrive to see Sharon. She’ll be distracted, and Rey will wonder if everything is ok. Sharon will note that she was sad about Neil’s family spending the holiday without him.

Rey will then float the idea of taking a trip to Miami over spring break with her and Faith Newman (Alyvia Alyn Lind).

Sharon won’t be into making plans for the future, as her possible diagnosis will be on her mind, so she’ll say that she’ll need to talk to Nick Newman (Joshua Morrow) and Faith first.

After Rey leaves, Sharon will get a call from a telemarketer thinking that it’s going to be the doctor, which will frustrate her. She’ll head home for the rest of the day.

Once home, Sharon will get a call from the doctor – the biopsy results will be in. When Rey arrives home, he’ll suggest that they go on a walk, which she’ll agree to, then she’ll stop him and say that she has something to tell him.

Next, Tessa Porter (Cait Fairbanks) and Tanner Watts (Chase Coleman) will be on a private jet on their way to a tour destination. Tanner will offer Tessa some advice about her set list and how to handle the crowd.

They’ll talk a bit about back when they were starving musicians, and Tanner will notice Tessa playing with her necklace, which Mariah Copeland (Camryn Grimes) got for her.

Tanner will note that the road can be rough on relationships, and that people can get lonely and slip up, but Tessa will confidently say, “Not me.” Tanner will like that, saying that they didn’t need the drama.

Later, they’ll play together and offer each other suggestions on their songs, and just as they’ve landed, Mariah will call, and she and Tessa will catch up.

Meanwhile, Victoria Newman (Amelia Heinle) will talk with Nikki Newman (Melody Thomas Scott) at Newman Enterprises. Victoria will tell her mom how worried she is about Billy Abbott (Jason Thompson), and how tiring it is to constantly be concerned about him.

Victoria will explain that Billy stopped therapy, and that he seems to be romanticizing his wild side, which she doesn’t think is healthy.

Nikki will advise Victoria to take care of herself and not focus so much on being Billy’s caretaker – it’s called “detaching with love.” Meanwhile, Billy will meet with Amanda Sinclair (Mishael Morgan) at the Grand Phoenix, and he’ll mention his woes with Victoria.

Billy will say that when he and Victoria got back together, he promised to be her rock, and now he’s thinking that he overpromised.

Amanda will think that Billy should talk with Victoria about how he’s feeling, but Billy will say that she’d just get this look of terror in her eyes, and that he needs to handle this on his own – and with a good friend.

Amanda will remind Billy that he’s not broken and doesn’t need fixing, which Billy will truly appreciate.

Later, at home, Victoria will return home to an empty house. As she’s straightening up, she’ll find a receipt in Billy’s coat pocket – it will be a bar receipt from the little bar outside of Genoa City.

When Billy comes home, Victoria will confront him about it, but he’ll suavely say that he had drinks there with a guy who was in town from Chicago. Victoria won’t be thrilled with that explanation.

Finally, Lily will arrive at Devon Hamilton’s (Bryton James) penthouse for a visit, and Lily will inquire about the Colin situation. Devon will skirt the issue, and after talking about the various things going on in their lives, including Lily’s misadventures in dating, Lily will ask again about the search for Colin.

Lily will note that Devon doesn’t want to talk about it, and she’ll wonder if it’s because he still suspects Cane could be involved in the scam.

In fact, Devon will say that if he finds out they are lying about their involvement, then they shouldn’t expect any mercy from him.