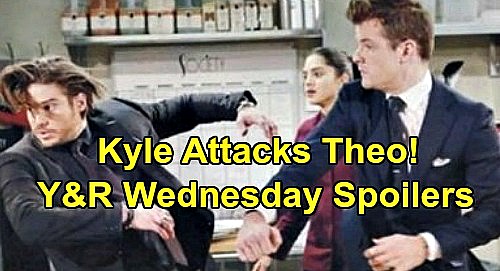 The Young and the Restless (Y&R) spoilers for Wednesday, January 15, tease that Sharon Newman (Sharon Case) will admit the secret she’s been keeping. Sharon wanted to be certain of her diagnosis and process her feelings before she moved forward.

However, Sharon gets cancer confirmation over the phone on Tuesday, which leaves her ready to come clean to Rey Rosales (Jordi Vilasuso).

In Wednesday’s Y&R episode, Sharon will confess that she has breast cancer. She’ll fill Rey in on finding the lump and taking the necessary steps to find out what she’s up against.

Rey will be understanding and supportive as Sharon breaks down. He’ll make sure Sharon knows he’ll be right by her side through it all.

Elsewhere, Nick Newman (Joshua Morrow) will get an SOS call. Since Sharon will be busy telling Rey the truth, Nick may rush to help someone else first.

Nick will indeed get updates on Sharon’s crisis this week, but Sharon should explore treatment options with Rey beforehand.

As for Nick, Faith Newman (Alyvia Alyn Lind) might contact him with more concerns about Sharon – or maybe he’ll get caught up in Phyllis Summers’ (Michelle Stafford) drama instead.

Whatever the case, Nick will make time to grill “Chance” Chancellor (Donny Boaz) on Wednesday. He’ll quiz Chance about his past, so this should involve the Vegas secret Chance shares with Adam Newman (Mark Grossman).

While Nick puts Chance on the hotseat, The Young and the Restless spoilers say Theo Vanderway (Tyler Johnson) will stir up some trouble. He’ll catch Lola Abbott (Sasha Calle) off guard, so this may lead to an altercation in Society’s kitchen.

It looks like Kyle Abbott (Michael Mealor) will catch Theo getting too close for comfort, so some harsh words will be exchanged.

As this fight escalates, Kyle will decide he’d had enough. He’ll punch Theo in the face, so Lola will look on in horror. The Young and the Restless spoilers say this cousin rivalry will explode in a big way, but there’s much more mayhem to come.

We’ll keep you posted as other Y&R news emerge. Stay tuned to the CBS soap and don’t forget to check CDL often for the latest Young and the Restless spoilers, updates and news.