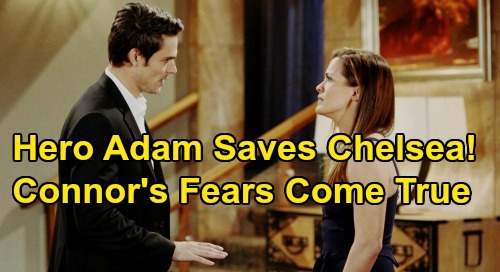 The Young and the Restless (Y&R) spoilers tease that Connor Newman’s (Judah Mackey) fears may be warranted. Y&R fans know Connor recently brought up his worries about the Grand Phoenix. He didn’t want to go back to the hotel due to what happened there – and he didn’t want Chelsea going back either.

Of course, this was a little odd considering Chelsea’s been at work many times since the hostage crisis. Why is Connor just now voicing his concerns? Perhaps it’s because Y&R writers just now came up with a story to hint at! This could be a huge clue that more chaos will erupt at the most dangerous spot in town.

In fact, that goes right along with The Young and the Restless preview info for 2020. When more drama erupts at the Grand Phoenix, Abby Newman (Melissa Ordway) will get distracted by it – which could leave “Chance” Chancellor (Donny Boaz) vulnerable to Phyllis Summers (Michelle Stafford).

If more drama’s going to break out, it could certainly be in the form of another deadly situation. Could that situation have something to do with Amanda Sinclair (Mishael Morgan) and her abusive ex-fiancé, Ripley Turner?

Amanda happens to be living at the Grand Phoenix, so the whole place is a target if Ripley discovers her location and launches a plan.

We know that Billy Abbott (Jason Thompson) will land in peril with Amanda, which will lead to some close moments. However, they may not be the only ones at risk. Chelsea could be on the job at the time, which would fit with Connor’s sudden concerns.

Will Adam Newman (Mark Grossman) leap into action? Will he be determined to save Chelsea and wind up getting hurt himself?

Adam assured Victor that he would always protect his family. Chelsea is also terrified of losing Adam – so much that she begged him to promise it would never happen again.

It feels like all this is building toward Adam playing the hero, but Chelsea and Connor could end up fearing the worst. The thought of Adam dying for real this time would be heartbreaking.

Adam will obviously survive whatever Y&R throws at him, but things could look bleak in the meantime. Connor recently wanted to try praying and he may have another opportunity to do that if Adam needs a miracle!