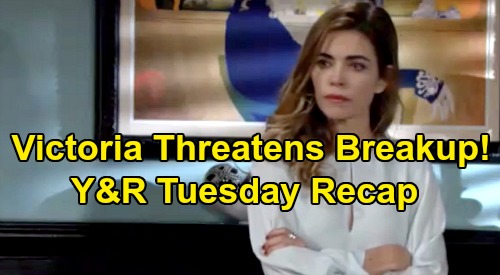 The Young and the Restless (Y&R) spoilers recap for Tuesday, January 21, teases that Sharon Newman (Sharon Case) will battle guilt about all the family drama. She’ll fret to Rey Rosales (Jordi Vilasuso) about being the reason Faith Newman (Alyvia Alyn Lind) isn’t returning to boarding school. Rey will remind Sharon that they all just want to support her, but she’ll hate that everything now revolves around her cancer.

Rey will get a work call, so Sharon will promise that it’s OK for him to leave. Meanwhile, Faith will talk to Nick Newman (Joshua Morrow) and Mariah Copeland (Camryn Grimes) about what’s next. She’ll be enrolling in Walnut Grove again, but she has to go back to boarding school and get her stuff. Mariah will want to take Faith so they can have a fun sister trip.

At the ranch, Nikki Newman (Melody Thomas Scott) will tell Victor Newman (Eric Braeden) about a special celebration. She’ll reveal that she sent out invitations to Newman Enterprises’ 50th anniversary party – although she’ll want the focus to be on Victor instead of the company.

Soon after, Nick will arrive with Faith and Mariah. He’ll Victor and Nikki in on Faith’s decision to stay in town and be near her family. They’ll discuss using the Newman jet for the trip to gather up Faith’s belongings, and Nikki will suggest she could take Faith. However, Mariah will note that was really looking forward to the sister bonding time.

Back at the cottage, Faith will apologize to Sharon for going away to boarding school in the first place. She’ll hate that she wasn’t there for Sharon when she was getting sick. Of course, Sharon won’t think Faith has anything to be sorry about. She’ll insist that Faith shouldn’t have any regrets.

The Young and the Restless spoilers say Sharon will reiterate that the cancer was caught early – and she intends to fight. Afterward, Mariah and Nick will show up. Once Faith and Mariah bid Sharon farewell, they’ll head off on their trip. That’ll leave Sharon to lean on Nick and explain how frustrating all this is.

Sharon won’t like the fact that Faith’s so fearful. She’ll feel like she’s supposed to be taking care of her child, but Faith’s worried about taking care of her mom instead. Nick will eventually offer a gift from Faith. She made her dad take her out shopping for a necklace, which features hope, faith and love charms. Sharon will get emotional over the perfect present and will insist she has everything she needs.

Back with Victor and Nikki, they’ll end up discussing Billy Abbott (Jason Thompson) and Victoria Newman’s (Amelia Heinle) issues. Victor will contend that Billy is nothing but trouble and will worry about his daughter getting hurt.

At home, Billy will push Victoria to talk to him. After Victoria finally agrees, she’ll shout about getting it all out in the open. Victoria and Billy will rehash how Billy’s secretly been confiding in Amanda Sinclair (Mishael Morgan). Y&R spoilers say Victoria will rant about the pain of that betrayal. She won’t like how disconnected they are and will want Billy to get back on track through therapy.

Billy won’t feel like he’s off track and will hope for a shot at proving it. However, Victoria will feel like she’s been burned too many times for that. She’ll think Billy’s moving backward, but Billy won’t have the same perspective. He’ll want Victoria to accept him like she accepts Victor, but Victoria will think there’s a big difference – Victor is Victoria’s father and Billy is her partner.

Victoria will announce that she’s done with this exercise in frustration. She’ll give Billy an ultimatum to get the help he needs or else they’re not going to make it. Over with Nate Hastings (Sean Dominic), he’ll chat with Elena Dawson (Brytni Sarpy) at Crimson Lights). Nate and Elena will discuss some New Hope mobile medical unit ideas since it’ll take a while to get the clinic up and running.

Once Amanda appears, Elena will encourage her to sit with them. She’ll bring Amanda up to speed on things at New Hope before exiting. Afterward, Amanda will get the scoop on how Nate’s related to Devon Hamilton (Bryton James). She’ll also make the wrong assumption that Nate and Elena have dated before.

Once Nate insists that they’re just friends and colleagues, Amanda will back off the subject. She’ll acknowledge that Nate wouldn’t cross that line, even if he were interested. Nate will suggest that anyone with a moral code would feel the same way. Amanda will look a bit uneasy as Nate argues that he’d never pursue someone in a relationship.

At Society, Rey will ask Elena about cancer while they wait for their takeout orders. He’ll confess that he knows someone who was recently diagnosed. Elena will talk about the advantages of a positive attitude and solid support system. She’ll also want Rey to remember that his loved one is more than just a diagnosis.