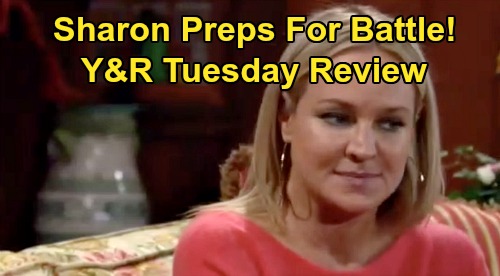 The Young and the Restless spoilers review for Tuesday, January 21, tease that Victoria Newman (Amelia Heinle) will give Billy Abbott (Jason Thompson) the cold shoulder before work, saying she’s got a meeting. Billy will say that they need to talk, and that he loves her and wants to fight for them. Still, Victoria will insist that now isn’t the time, and Billy will persist until Victoria angrily yells that they can just get everything out in the open.

Billy will be taken aback by Victoria’s rage – she’ll be extremely upset that Billy chose to confide in Amanda Sinclair (Mishael Morgan) rather than her. Billy will explain that there was nothing physical or romantic with Amanda, but Victoria will argue that it was still intimate and an “ominous sign of a disconnect” between them. Victoria will say that Billy gets some thrill with having a secret relationship and that he loves drama.

Ultimately, Victoria will insist that Billy see a counselor or go to Gamblers Anonymous meetings – something to get him back on track. Billy will argue that he’s not off track and that he just needs her to believe in him. But Victoria will be defiant and throw the past in Billy’s face. She’ll say that he’s going backwards and he’s no longer the Billy she committed to. Billy will accuse her of wanting things her way and say that all he wants is acceptance, like she gives Victor Newman (Eric Braeden).

That will seriously anger Victoria, and she’ll put on her coat in a huff, saying that this isn’t a conversation, but rather an exercise in frustration and she’s done. She’ll tell Billy that if he doesn’t get help, then she can guarantee that they won’t make it, leaving Billy standing there alone in the living room.

Of course, Victoria is too close to the situation to see it, but really she’ll have just given Billy a huge shove back in Amanda’s direction. Plus, she’s given him even more problems that he needs to talk over with a friend, and that person might just end up being Amanda again. It will be interesting to see whether Billy and Amanda ever reconnect again, and what Victoria will do when she finds out. And it could be a bad scene the next time Victoria and Amanda bump into each other!

Meanwhile, on the new episode of Y&R on Tuesday, January 21, Sharon Newman (Sharon Case) will be feeling overwhelmed by everyone’s sudden attention to her and her diagnosis. She’ll have just spoken with Nick Newman (Joshua Morrow) about Faith Newman (Alyvia Alyn Lind) leaving boarding school, and she’ll wish that Faith wasn’t putting her life on hold to be nearby.

But Rey Rosales (Jordi Vilasuso) will tell her that it’s what Faith wants, and that she’s doing it out of love. Sharon will accept that, but she’ll still feel like everything has started to revolve around her diagnosis. Later, Faith will come to see Sharon before taking off with Mariah Copeland (Camryn Grimes) to pick up her things at boarding school. Faith will apologize to her mom for not being around while she was getting sick.

Sharon will tell Faith that she was just living her life, which was exactly what she should have been doing. She’ll reassure her daughter that she is going to fight with everything in her, and that they’ll find their way together. On her way out the door, Faith will leave a little present for her mom, which Sharon won’t notice.

Once Faith is gone, Nick and Sharon will talk alone, and Sharon will ask Nick how Faith is really going. Nick will say that Faith is scared, and that she can’t get cancer out of her head, but that she’s determined to help Sharon through this. Nick will then point to the present, and Sharon will open it. It will be a necklace – something to remind her never to give up. Sharon will be truly touched.

Finally, Rey will encounter Elena Dawson (Brytni Sarpy) while picking up takeout at Society. He’ll try to subtly ask some questions about cancer – like what a 75% survival rate really means. Elena will catch on that someone Rey knows must have cancer, and Rey will say that someone was recently diagnosed, but that he wants to maintain their confidence.

Rey will wonder about what makes the difference between people who make it and those who don’t, and Elena will explain a few things. She’ll say that cancer can be relentless, but that in her opinion an optimistic patient with a strong support system will usually do pretty well. She’ll also note that cancer patients are much more than their diagnoses. That will strike a chord with Rey, who will say to himself, “so much more.”

It looks like Sharon is going to be quite lucky to have Rey in her life at this point in time. He seems determined to be by her side the whole way, without being too clingy or smothering her. Sharon will need support but space at the same time, especially as she goes through chemotherapy and all of the difficulties that she’ll have with that. Between Rey, Nick, Faith, and Mariah, Sharon should be in good hands.

It sounds like a lot of Y&R drama is heating up for Tuesday episode, so stay tuned! We’ll give you updates as Y&R news comes in. Stick with the CBS soap and don’t forget to check CDL often for the latest Young and the Restless spoilers, updates, and news.