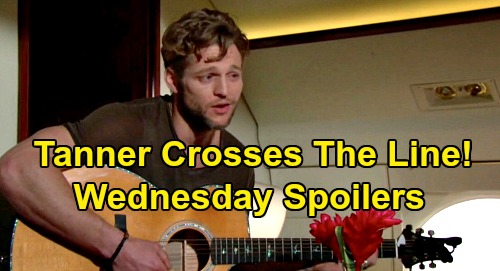 The Young and the Restless (Y&R) spoilers for Wednesday, January 22, tease that Adam Newman (Mark Grossman) will seek out “Chance” Chancellor (Donny Boaz) with a goal in mind. They’ll do some conspiring, but maybe they’ll scheme for a good cause. Adam intends to get Dark Horse back up and running, so he might have a security project for Chance to work on.

Of course, they might need to address the Phyllis Summers (Michelle Stafford) situation at some point. Phyllis is far too interested in what happened in Vegas, so Adam and Chance may need a plan to handle her. Unfortunately, handling Phyllis is easier said then done!

Over with Fenmore “Fen” Baldwin (Zach Tinker), he’ll deliver some stunning news to his parents. Michael Baldwin (Christian LeBlanc) and Lauren Baldwin (Tracey E. Bregman) will be blown away once they get updates. Will Fen’s bombshell be something positive or negative?

It’s possible Fen’s recovery will take a wrong turn, but it’s also possible he’ll make a choice that’s helpful. Fen might pick another career path since touring tends to come with so much temptation. He may think it’s best to focus on a different passion – one that doesn’t put him back in the path of risky drugs.

Whatever the case, it’ll be interesting to see how Fen shocks Lauren and Michael. Tessa Porter (Cait Fairbanks) could be in for a shock herself thanks to her own tour. Tanner Watts (Chase Coleman) is set to appear on Wednesday, so Tessa should appear, too.

It seems like Tanner may be interested in more than his ex’s music, but Tessa is firmly committed to Mariah Copeland (Camryn Grimes).

Based on how Tessa’s been written so far, her unwavering devotion to Mariah can be trusted. They’re genuinely in a good place right now. Tessa only lied about her three-month marriage to Tanner because she was afraid of blowing things up.

In fact, Tessa’s never shown true romantic interest in anyone besides Mariah in her entire run on the show – and that includes Noah Newman (Robert Adamson).

If Tanner eventually crosses the line, he’ll probably get himself slapped or at least lectured. That may or may not happen, but something definitely feels a little off.

If nothing else, Wednesday’s Y&R episode could just build on the suspicious vibe from Tanner and set up some overstepping that comes later.

In the meantime, Theo Vanderway (Tyler Johnson) will push Kyle Abbott’s (Michael Mealor) buttons again. The Young and the Restless spoilers say Theo won’t be deterred by Kyle’s recent punch. Theo might even welcome another one if it meant he’d score more sympathy points with Lola Abbott (Sasha Calle).

Theo will drop some hints about making a move on Lola while Kyle’s out of town. However, Kyle and Summer Newman (Hunter King) will make their own move later this week! The Young and the Restless spoilers say a hot kiss could lead to big trouble, so stay tuned.

It sounds like some fantastic drama’s coming up. We’ll keep you posted as other Y&R details emerge. Stick with the CBS soap and don’t forget to check CDL often for the latest Young and the Restless spoilers, updates and news.