BY hellodrdavis on January 28, 2020 | Comments: one comment
Related : Soap Opera, Spoiler, Television, The Young and the Restless 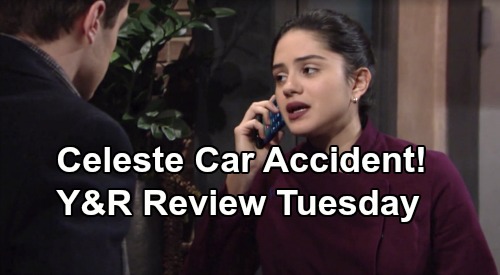 The Young and the Restless spoilers review for Tuesday, January 28, tease that Sharon Newman (Sharon Case) will be organizing her cancer pamphlets and treatment records when Mariah Copeland (Camryn Grimes) stops by for a visit. She’ll help Sharon with her organizing, and Sharon will remark that having cancer is a full-time job.

Eventually, Mariah will offer to take over Crimson Lights to ease some of the burden, but Sharon will shut that idea down pronto.

Later, Sharon will apologize for shutting Mariah down so hard, saying that she’s going to shut Crimson Lights down temporarily and give it a facelift. Mariah will immediately jump in and push Sharon to talk with Nick Newman (Joshua Morrow) about contractors, but Sharon will shut that idea down, too.

Sharon will note that while Nick has a huge heart, he can be a bit overzealous, and that when she wants help, she’ll ask.

Nick will then drop by, with a thick folder full of research that he did on cancer specialists. Sharon will say that it’s incredible and thoughtful, but that she’s happy with her doctors. After Nick goes, Sharon will tell Mariah, ‘You see what I meant?” Sharon will then explain that she just wants to be herself, not someone who needs tending to.

Mariah will have drinks with Nick later at Society, and she’ll broach the subject of not hovering over Sharon or treating her differently now that she has cancer. She’ll go on about how Sharon’s capable of asking for help she needs it, and after a while Nick will realize that maybe he went overboard.

They’ll agree to not hover and let Sharon be Sharon, since the last thing they want to do is add to her burden.

Meanwhile, on the new episode of Y&R on Tuesday, January 28, Theo Vanderway (Tyler Johnson) will welcome Summer Newman (Hunter King) back to Jabot after her trip to San Francisco with Kyle Abbott (Michael Mealor).

He’ll needle her about whether she and Kyle gave into their feelings on the trip, and she’ll needle him right back about spending time at Society near Lola Abbott (Sasha Calle) while they were away.

After some bickering, Theo will say that Lola is the only friend he has in Genoa City, and that they grew up alike and that it’s good to have someone to talk to without feeling judged. Summer will think that Theo’s really into Lola, and she’ll keep deflecting Theo’s inquiries about what happened in San Francisco.

At Society, Kyle will appear and hug Lola, happy to be back but obviously feeling conflicted about the kiss with Summer. Lola will ask how things went on the trip, and Kyle will talk about everything but Summer, which Lola will pick up on.

Kyle will then say that Summer was great on the trip and was “all business all the time.”

Lola will say that she missed Kyle and that she couldn’t want for him to get back so they could talk. She’ll think that the time apart is making their relationship weaker, and Kyle will urge her to come home early tonight so they can really talk, just the two of them.

As they’re about to leave. Arturo Rosales (Jason Canela) will call Lola with the news that Celeste Rosales (Eva LaRue) had a car accident and broke her ankle.

Kyle will the say that their talk can wait and that she should deal with the issue with her mom. He’ll head back to Jabot and sit alone in his dark office thinking when Summer walks in. She’ll wonder why Kyle isn’t with Lola, and he’ll explain that they were going to go clear the air but got interrupted.

Summer will worry about what Kyle is going to tell Lola, and Kyle will indicate that it wouldn’t do any good to tell her about the kiss. He’ll lament that he feels like the worst person in the world, and that he just wants to get his marriage back on track.

At this point, Theo will approach the open door and start eavesdropping on their conversation. He’ll listen as Kyle says that he fought to marry Lola and that it’s best for them to forget what happened in San Francisco.

Theo will keep listening as Summer says she owes Kyle an apology, and that they’ll put what happened in the vault and never think about it again. Theo will look intense as he absorbs what he’s just heard.

But will Theo run to Lola and tell her what he’s heard? Or will he choose to find a way to use the information against Kyle in another fashion – perhaps to get what he wants at Jabot?