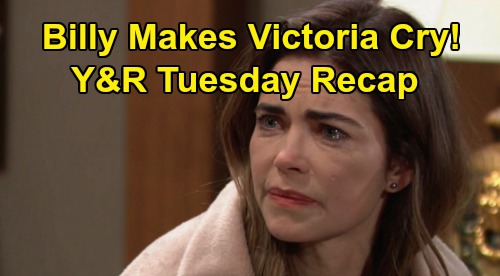 The Young and the Restless (Y&R) spoilers recap for Tuesday, March 10, teases that Victoria Newman (Amelia Heinle) will get updates on the CEO situation at Newman Enterprises. After Nikki Newman (Melody Thomas Scott) explains that Nick Newman (Joshua Morrow) is temporarily taking over, Victoria will be happy to hear it.

Next, Billy Abbott (Jason Thompson) will call Victoria and score an invitation to the ranch. Once Billy arrives, he’ll be apologetic about everything Victoria’s endured. Billy will wish he could trade places with Victoria, and Victoria will believe that.

Even so, Victoria won’t feel like anything has changed. Billy broke Victoria after she opened her heart to him again. He wanted a fresh start and now he’s got one.

After Billy exits, Victoria will break down in tears. Sadly, Sharon Newman (Sharon Case) won’t be having a great day either. Her chemo treatment will be cancelled due to her low white blood cell count.

Once Rey Rosales (Jordi Vilasuso) heads off to work, Sharon will squeeze in a nap. A little later, Sharon will wonder if Mariah Copeland’s (Camryn Grimes) gotten in touch with Tessa Porter (Cait Fairbanks).

Mariah will admit Tessa still isn’t answering her calls, so Sharon will feel guilty. She’ll think her cancer’s keeping Mariah from doing what she should be doing, which is finding Tessa and apologizing. Sharon will feel like Mariah’s going to need Tessa since her condition will get worse before it gets better.

Afterward, Mariah will pop in Jabot to see Kyle Abbott (Michael Mealor). She’ll suggest she’s not going to judge Kyle over Summer Newman (Hunter King) since her own life’s a disaster.

Mariah will tell Kyle about her job loss and allude to a health issue. She’ll confess that she hasn’t told Tessa about any of this and will add that Tessa caught her with company.

Mariah will point out that she accused Tessa of cheating only to turn around and cheat herself. Kyle will feel like Mariah has to track Tessa down and beg for forgiveness. He’ll draw some comparisons between his story with Summer and Mariah’s story with Tessa. Kyle will know beyond a shadow of a doubt that Summer’s the woman for him and will think Tessa is the woman for Mariah, too.

At Society, Rey will get a text from Mariah about leaving Sharon. Mariah will admit Sharon’s still struggling, so Rey will send Nikki over to check on her. Once Nikki shows up, she’ll offer Sharon the chance to unload and share her darkest fears.

Sharon will confess that it’s hard for her to go to the worst-case scenario with Rey and Mariah. She’ll worry about what’ll happen if she’s forced to stop chemo completely. Sharon will be overwhelmed since she’s living in a constant state of terror.

Nikki will point out that Sharon has to fight and accept that the rest is beyond her control. She’ll feel confident that Sharon’s tougher than this cancer. Sharon will get emotional as Nikki comforts her.

Sharon will feel like no one would believe the two of them acting so chummy, so Nikki will joke about it being a good thing no one will ever know. She’ll pull Sharon close as they cry together.

Other Young and the Restless spoilers say Rey will catch up with Billy at the Grand Phoenix. They’ll talk about Billy’s visit to the ranch and how nobody’s a fan of him except for the kids.

Billy will open up about Victoria shutting him out, so Rey will weigh in with his thoughts. He’ll think Victoria’s connecting her pain and fear to Billy instead of Ripley Turner (Christian Keyes).

Billy will talk about how helpless he feels. It’s hard to watch someone you love suffer and not being able to do anything about it. Y&R spoilers say Rey will definitely be able to relate to that.

Over with Jared (Michael Maclane), the young man who was helped at the new clinic recently, he’ll track down Elena Dawson (Brytni Sarpy) for help with an emergency. It turns out Jared’s grandfather collapsed.

At Crimson Lights, Amanda Sinclair (Mishael Morgan) will talk to Nate Hastings (Sean Dominic) about her plans to attend Ripley’s arraignment. Nate will look forward to getting better acquainted with the authentic Amanda after everything’s settled. He’ll eventually receive a text with alarming news.

While Nate examines Jared’s grandfather in the hospital, Devon and Elena will take the teen to Crimson Lights. Jared will meet Amanda, who’ll ask him a few questions over a meal. He’ll assure Amanda that he’s 18 and can take care of himself.

Once Nate returns, he’ll reveal that Jared’s grandfather is stable. Amanda will give Jared some money so he can grab a pastry for the road. He’ll dash off to visit his grandpa and lead Amanda to a realization.

Amanda would rather spend time with good people who need her, so she’ll opt to skip Ripley’s arraignment. As for Devon and Elena, they’ll be fired up about changing the world together.