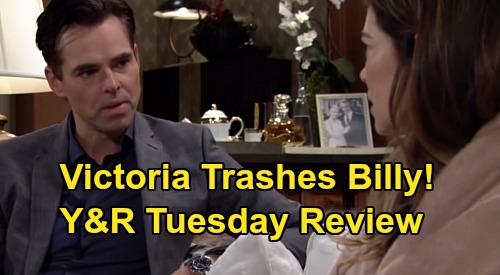 The Young and the Restless spoilers review for Tuesday, March 10, tease that Nikki Newman (Melody Thomas Scott) will talk with a still-recovering Victoria Newman (Amelia Heinle) at the ranch. As they are chatting, Billy Abbott (Jason Thompson) will call Nikki, who won’t want him to talk to Victoria. But Victoria will take the phone and tell Billy that he should come over.

Billy will arrive a short while later, and he’ll thank Victoria for allowing his visit. She’ll give him the cold shoulder as he says he wishes that it would have been him instead. She’ll lash out, saying that his sentiment changes nothing, and he’ll get up to leave. But she’ll stop him, ranting about how she opened her heart up to him and trusted him…and this is where it led her.

Victoria will ask him to look at her, to see that she was broken and that it was on him. She’ll him that they are done, and that the only thing between them now was the kids. She’ll even say that he should be happy about all this, since he wanted a fresh start so badly – after all, there’s a whole world full of people out there that he hasn’t burned yet. Victoria will then tell him to leave, and after he leaves, she’ll cry.

Meanwhile, on the new episode of Y&R on Tuesday, March 10, Sharon Newman (Sharon Case) will hurriedly prepare for her chemo session. She’ll be worried since she had a low-grade fever last night that she might not be able to get her treatment.

Rey Rosales (Jordi Vilasuso) will arrive and they’ll head to the clinic, only to return a short while later. Turns out, Sharon’s white blood count will have been too low for her to receive the chemo.

Rey will want to take the day off and stay with Sharon, but she’ll refuse and shoo him off to work. Mariah Copeland (Camryn Grimes) will make some tea and they’ll talk about Mariah’s situation with Tessa Porter (Cait Fairbanks). Mariah will relay that Tessa still isn’t answering her phone. Sharon will urge her to go find Tessa and apologize for what she did, but Mariah will refuse.

Sharon will quickly surmise that Mariah didn’t want to leave because of her cancer, and she thought that if she hadn’t gotten sick, then Mariah might have been out on tour with Tessa and none of this would have happened. Mariah will say that Sharon shouldn’t be worrying about all of this right now and that everything is going to be fine.

Next, Rey will arrive at the Grand Phoenix, and he’ll text with Mariah about how Sharon is doing. Mariah will report back that Sharon’s having a tough time, so Rey will call Nikki and ask if she can do him a favor. Billy will then show up and the men will sit together at the bar.

Billy will figure that Rey is looking for Amanda Sinclair (Mishael Morgan), and they’ll talk about her ordeal with Ripley Turner (Christian Keyes) a bit, and about how Victoria may be displacing her feelings about the attack onto Billy.

Finally, Nikki will show up at Sharon’s door wondering why Sharon is pushing away the people who love her when she needs them the most. She’ll reveal that Rey called her and asked her to check in on Sharon. The ladies will sit and talk, and Sharon will reveal that today was supposed to be her fourth chemo infusion, but that her immune system wouldn’t cooperate.

Nikki will sense that Sharon is holding back, and she’ll urge her to spill whatever terrifying thoughts she has – just to get them out. Sharon will admit to having overwhelming feelings of dread that she doesn’t share with Rey or Mariah. Nikki will suggest that Sharon accept the comfort and support that others are offering.

Sharon will share that she can’t bring herself to talk about the worst-case scenarios with Rey, Mariah, or Faith Newman (Alyvia Alyn Lind). She’ll say that she’s been living in a constant state of terror, but Nikki will tell her to never, ever give up. She’ll say that Sharon needs to fight this illness with everything in her.

Sharon will laugh and say, “You want me to fight this cancer the way I’ve always fought you.” Nikki will tell Sharon that she’s tougher than cancer, and Sharon will marvel at the two of them getting along so well. They’ll hug and cry together.

There’s a lot of drama heating up for Tuesday’s episode, so stick with the CBS soap, and check back with CDL often for the latest Young and the Restless spoilers, updates, and news.