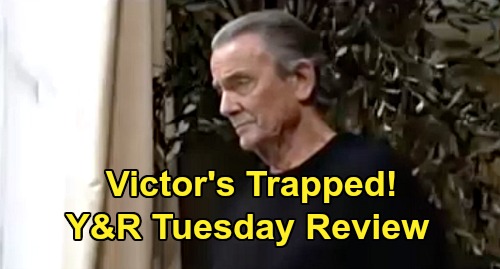 The Young and the Restless spoilers review for Tuesday, March 31, tease that Lola Rosales (Sasha Calle) will meet with Kyle Abbott (Michael Mealor) at Crimson Lights. Lola will immediately start in on how she almost didn’t come, and how she has no interest in rehashing everything about Theo Vanderway (Tyler Johnson) with Kyle. But Kyle will stop Lola, saying that she’s right and that he has no say in who she spends time with.

This will take Lola aback, and Kyle will explain that while he doesn’t like her hanging out with Theo, it’s none of his business. Kyle will say that Lola is her own person, and that she’s strong and determined. Lola will appreciate Kyle’s words, but she’ll be confused about why Kyle wanted to meet, then she’ll realize that he wants to talk about the divorce.

Kyle will say that he doesn’t mean to pressure Lola, but Lola will say that they need to talk about it. They’ll both note how final it all seems, and both Lola and Kyle will immediately tear up.

Kyle will say that he’s sorry for how he hurt Lola, and Lola will note that perhaps they took some time to get to the divorce so they could part ways without anger. Kyle will take Lola’s hand briefly, then they’ll separate.

Meanwhile, on the new episode of Y&R on Tuesday, March 31, Theo will arrive at the Abbott estate. Jack Abbott (Peter Bergman) will greet him, and Theo will inquire about how Dina Mergeron (Marla Adams) is doing.

Later, Theo will sit with Dina, while Jack observes. Theo will talk nicely to Dina, telling her about what he’s been doing at work, and about what he’d like to accomplish.

Theo will then say that he’s nervous because of a girl, and that he really wants it to work out more than he ever has with anyone. Theo will admit to being afraid and not knowing whether take it slowly or make a move,

Dina, who will have been silent this whole time, will suddenly turn to Theo, smile, and tell him not to worry and that he’s a good catch. Theo will look at Jack, and Dina will go back to being distant.

Later, on his way out, Theo will get a text from Kyle’s assistant asking if he still wants help with his “Kyle problem.” Theo will text back that he needs to think about it.

Alyssa will explain that her father, AJ Montalvo, wasn’t a good man, but that he wasn’t a killer after all. As Alyssa will explain, Adam’s stepfather Cliff Wilson (David Cowgill) had money problems and AJ fronted him some money, and when Cliff couldn’t repay, AJ threatened to take Hope Wilson’s (Signy Coleman) farm, then pressured Cliff to sell the farm.

Alyssa will go on to say that when Cliff stalled, AJ hired a guy to scare him, but the guy drove drunk and actually killed Cliff. Alyssa will theorize that AJ then went to Hope to collect on the debt, and that Hope called Victor…then suddenly AJ wound up dead in a fall from a barn loft.

But Alyssa will say that she got the coroner to admit that AJ’s body had been moved post-mortem and that the death was not an accident. Alyssa will conclude by saying that Victor waved his checkbook, and that AJ was quickly cremated.

Adam will then find out that Alyssa has her story about the case written, and that she’s got all her notes and evidence in her trunk, including the coroner’s personal notes and records…and that the paper trail leads right back to Genoa City. Adam will pressure Alyssa to give him all her evidence, and after some persuading, she’ll agree.

Later, Chelsea Lawson (Melissa Claire Egan) will arrive at the penthouse and see Adam looking at Alyssa’s box of evidence. Chelsea will ask what’s in the box, and Adam will say that it’s “everything” and that it’s all in there. “We got him, Chelsea,” Adam will say.

There’s a lot of drama heating up for Tuesday’s episode, so stay tuned! We’ll be sure to let you know as more Y&R news comes in. Stick with the CBS soap and remember that CDL is here with all of your Young and the Restless spoilers, recaps, and updates.