BY hellodrdavis on May 25, 2020 | Comments: Leave Comments
Related : Soap Opera, Spoiler, Television, The Young and the Restless 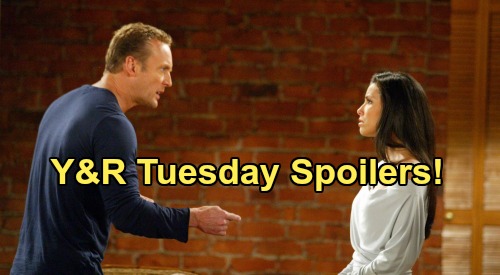 The Young and the Restless spoilers for Tuesday, May 26, tease that viewers will see an encore episode that originally aired on August 14, 2003. The episode is part of “Villains Week” and involves a terrifying encounter between Isabella Braña (Eva Longoria) and Christine Blair (Lauralee Bell). Long-time viewers may remember that Eva Longoria portrayed Isabella from 2001-2003, and the episode that viewers will see marks the end of Eva Longoria’s run on the show.

Eva’s character Isabella was a very troubled woman with mental health issues who had an affair with Paul Williams (Doug Davidson) and later gave birth to their son Ricky Williams (Pete Porte).

Paul ping-ponged romantically between Isabella and Christine for a while, but ultimately Christine and Paul reunited. Isabella wasn’t happy about this, and she decided to get revenge on Christine.

Isabella made it appear that Christine had murdered her, which resulted in Christine being in loads of trouble and investigated for murder. That’s where Tuesday’s episode of Y&R will pick up. In the episode, Paul and Michael Baldwin (Christian LeBlanc) will keep trying to investigate the evidence against Christine, hoping to find that Christine isn’t guilty.

Paul will note that Isabella’s parents didn’t seem too upset about her murder, and he’ll suggest that Christine undergo hypnosis again, to see if she remembers something new.

Meanwhile, in her bathroom, Christine will be confronted by a knife-wielding Isabella, whom everyone believes is dead. Christine will think that she’s hallucinating when Isabella appears before her with a big butcher knife.

As it will turn out, Isabella will have drugged Christine’s wine earlier, and Christine will think that she’s hallucinating when she sees Isabella.

Elsewhere, Brittany Hodges (Lauren Woodland) will meet with Bobby Marsino (John Enos) in his office. Brittany will return the necklace that Bobby had given her, telling him that she’s in a relationship with Raul Guittierez (David Lago), and that she wants to keep her relationship with him strictly business. Bobby will accept the necklace back.

Brittany will then get ready to perform, while Raul comes in and encounters Bobby. Raul will have some questions for Bobby about Brittany, but Bobby will only say that Raul should stay to watch the show.

It sounds like viewers are in for a treat with this walk down memory lane and all the exciting drama on Tuesday’s episode. And if you’re a newer viewer, you’ll get a great look at Y&R history! Stick with the CBS soap and enjoy the encore episode! Here at CDL, we’ll keep you up to speed on all the latest Y&R news and spoilers.