The Young and the Restless Spoilers: Victor & Adam’s Double Arrest Scandal – Father & Son Stuck in the Slammer, Victoria To Blame? 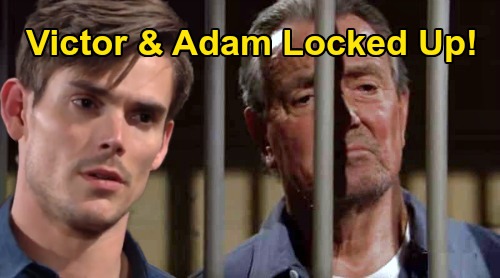 The Young and the Restless (Y&R) spoilers tease that Adam Newman’s (Mark Grossman) right about one thing: he has a lot in common with his father! That’s been a theme throughout this whole Kansas secret storyline. Adam’s always wanted to show Victor Newman (Eric Braeden) that they’re just alike.

In some ways that’s true since Victor’s been known to be pretty ruthless over the years. Victor and Adam also have a great love for their children – which Victor proved by trying to shield Adam from the horror of what he did.

In the episode that airs April 21, Victor finally admits that Adam killed AJ Montalvo. That news is obviously going to turn Adam’s world upside down. Once Adam hears the whole ugly story, he may even recall the traumatic memories he’s apparently blocked out.

Since Victor’s turning the tables here, it seems likely Adam will have no choice but to give up the Newman throne. Unfortunately, this story is destined to be unleashed – and that could have serious legal ramifications for both father and son. Adam killed AJ, but Victor went to great lengths to cover it up.

Could Y&R be building to a double Newman arrest? The Young and the Restless spoilers state that Victoria Newman’s (Amelia Heinle) actions could do major damage to Newman Enterprises.

If Victoria somehow leads to this story getting published and the whole truth unravels as a result, Victor and Adam’s arrests would be quite a blow to the company.

It would also line up with Victor and Adam’s “just alike” theme. Putting them both behind bars would really drive that point home! It would also make Adam feel even worse since Victor was only trying to protect him. This could be Michael Baldwin’s (Christian LeBlanc) opportunity to throw the book at both of them.

It doesn’t get more scandalous than a buried murder secret coming to light, especially one that results in two Newmans being taken into custody. The Young and the Restless spoilers say Victoria will battle regrets soon – and she wouldn’t regret hurting Adam. It’s Victor that Victoria cares about and wouldn’t want to see hurt.

Could Victor and Adam both get thrown in the slammer together? It’s been a while since Y&R did a good prison storyline, so that might be a good way to go. Perhaps Adam and Victor could even bond behind bars to cap off all this drama.