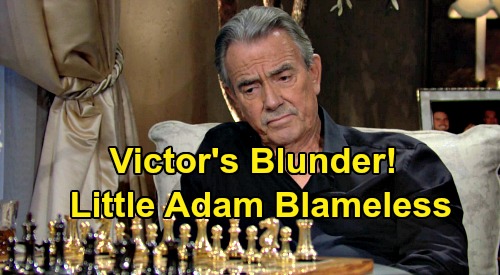 The latest crisis in Newman world has Victor taking further abuse from Adam. He told his second-born son the truth and even that wasn’t good enough for his ever ungrateful namesake offspring.

Thankfully, Niktor is together and in a good place in the latest edition of their relationship. Nikki has witnessed the recent verbal abuse that Adam and Chelsea Lawson (Melissa Claire Egan) have wrongly applied to Victor, who did all that he could to protect Grossman’s character from psychological harm and legal consequences.

Young And The Restless Spoilers – What Did Adam Newman Do?

Neither Victor, nor Hope Wilson (Maggie Gwin) actually know what Adam did in the dining room at the Kansas farm. Victor wasn’t present and Hope was blind. So, she didn’t actually see what happened between A.J. Montalvo (Marcus DeAnda) and their eleven year old son.

So, it’s possible that some other scenario caused A.J.’s death to happen. While it would seem to be far-fetched, he could also still be living, if, in fact, Victor never saw the body. That could mean that the write-in of the farm’s caretaker was more purposeful then it initially seemed.

However, if Adam did accidentally kill A.J., when shoving him back, as recalled memories appear to indicate, then Victor and Hope merely protected their child in an untenable situation.

Regardless of what happened, the loan shark threatened a blind woman and her child, thereby putting himself in a situation he never should have been in.

Young And The Restless Spoilers – Victor Newman Wrongly Doubts Himself

Victor acts with certainty, which makes his actions in this situation intriguing. He knows it was right to protect Adam at the time, but he’s genuinely doubting whether he should have told him the truth all these years later.

It was understandable that Adam was thrown off-course when learning about A.J.’s death. He first believed that Victor did it himself, or had someone get rid of the loan shark.

As viewers recall, Adam used that misconception as a weapon against his father in order to take control of Newman Enterprises. He’s conveniently forgiven himself for that terrible choice and for using Alyssa Montalvo (Maria DiDomenico) to uncover what he thought was damning information about Victor.

Nikki has and will continue to use her role in the family to protect Victor from facing what could be a sticky legal situation. Victor would seem to be in danger of legal prosecution for covering up what happened to A.J. on the farm.

Adam has admitted to killing a man in Las Vegas, Nevada. It would be useful if Niktor learns about that matter, as both halves of this legendary couple would be bolstered by the awareness of Adam’s full predicament.

But rather than leverage the Vegas information against him, Victor and Nikki could present a mutually beneficial peace plan. Whether Adam would accept it is another question that can be answered on Y&R.