BY Heather Hughes on January 18, 2020 | Comments: one comment
Related : Soap Opera, Spoiler, Television, The Young and the Restless 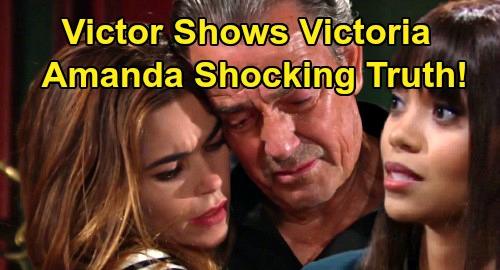 The Young and the Restless (Y&R) spoilers tease that Victoria Newman (Amelia Heinle) will soon realize Billy Abbott (Jason Thompson) knows Amanda Sinclair (Mishael Morgan) far better than he’s been letting on. After Billy confesses who he’s actually spending his time at the dive bar with, Victoria’s going to have serious concerns.

Of course, Billy will undoubtedly act like Victoria’s being a judgmental nag and blowing all this out of proportion. Is that really the case though? Who wouldn’t jump to conclusions in Victoria’s position? She has every right to feel threatened by Amanda when Billy’s been sneaking around with her and lying to cover it up.

Besides, Billy himself has battled strange thoughts about this supposedly platonic relationship. He can’t seem to wrap his head around it, so there’s no reason for Victoria to be able to either. The Young and the Restless spoilers say Billy and Victoria will have a big blowup, which could lead Victoria to confide in her father.

Victoria may be hesitant to reveal too much to Victor Newman (Eric Braeden) considering how he’s felt about “Billy Boy” in the past. Even so, Victoria knows Victor has resources and may be able to help. She may not trust Billy’s side of the story when it comes to Amanda.

Plus, Victoria knows nothing about what Amanda’s truly like. She’ll need more information – and Victor already offered a dossier full to Devon Hamilton (Bryton James). He’s got the goods, so that may be how Victor delivers major ammo to Victoria during the week of January 27-31.

As an abuse victim herself, Victoria may have sympathy for Amanda if she finds out about the restraining order situation with her ex-fiancé. Nevertheless, Victoria’s family is at stake here.

Victoria’s bound to keep viewing Amanda as a threat to her relationship with Billy, so that could set up a bit of a rivalry. There may also be other secrets Amanda’s keeping that aren’t so sympathetic in Victoria’s eyes.

When it comes to the ammunition Victor provides, that could involve Billy as well. Y&R spoilers say Billy will land in a jam he may not be able to wiggle out of. If Billy takes his bond with Amanda further between now and then, Victor may hand over proof.

Victor’s always good at keeping tabs on people – particularly the love interests of his children and grandchildren. Regardless, Billy’s going to feel backed into a corner and that’s the last place he wants to be.